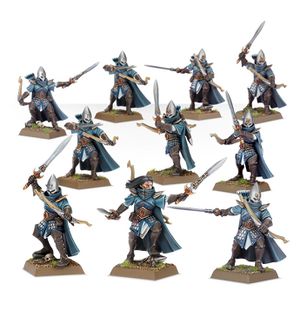 The Shadow Warriors are Aelves of the Shadowblades and Swifthawk Agents armies that are trained to be masters of infiltration. [1b][2]

Trained extensively in the techniques of ambush and in guerrilla warfare, they also act as elite scouts and skirmishers for the armies of Sigmar and patrol the wild areas of the Mortal Realms [1b] protecting cites such as Tempest's Eye. [1a]

Many find them grim and the legends say that they are Aelves that lost all that they held dear and seek peace by inflicting death on enemies as they strike from the shadows. [1b]

Shadow Warriors are armed with Ranger Bows. For melee those of the Shadowblades use Coldsteel Blades, while those of the Swifthawk Agents use Shadow Blades.[3a][3b]