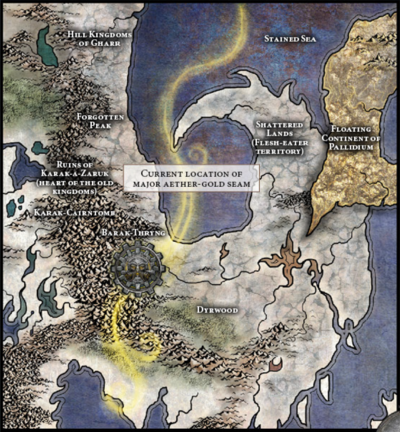 Location of Karak-a-Zaruk in the Spiral Crux.

Despite it's grandeur the karak fell during the Age of Myth.[1a]

At some point after it's fall the great halls and chambers of the karak were overrun by Skaven of Clans Moulder. The vicious ratmen transforming the once grand city into a charnel pit dedicated to their twisted experiments.[1a]

The karak also became premier stronghold of the Verminus of Clan Fang, who are led by Clawlord Hakkrit. This insidious warlord, with aid from Clans Skryre, has corrupted the forges and rune-magics of the stronghold and used them to create his Forgefangs.[3a]

An airfleet commanded by Admiral 'Ironbrow' Kreeg of Barak-Thryng begins excavating the Karak, in hopes of recovering what relics of their past may remain within the stronghold. Upon discovering the Skaven infesting the karak, 'Ironbrow' Kreeg swears to never leave until the lot of them are wiped out and the stronghold cleansed. To that effect he leads a force of Grundstok soldiery ever deeper into the ruins, killing every Skaven met along the way.[1a]

The sprawling halls of the karak turned Skaven burrow are carved into the Gildpeak, a great mountain located in the Quenched Lands of Odrenn, one of the landmasses of the Spiral Crux.[3a]