From Age of Sigmar - Lexicanum
(Redirected from Sorceress)
Jump to: navigation, search 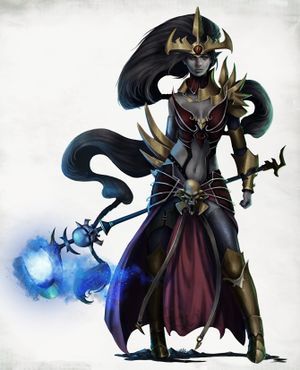 Sorceresses are female Aelven mages that lead the Darkling Covens. Each Darkling Coven is ruled by a single, powerful Sorceress aided by several underlings, apprentice spellcasters, captains and major-domos, but ultimately she rules witn unquestioned authority and cruel cunning. While masters of shadow magic, Sorceresses rarely take to the battlefield, preferring to weave their webs of intrigue behind the scenes.[1a][4][2a]

Most of these potent mages are content to manipulate through a web of spies and minions, but some enjoy the thrill and danger of direct conflict and a few of these have become Soulbound. Although often divorced from compassion or empathy, they have no wish for either Chaos or the Undead to conquer the Mortal Realms and so can be staunch warriors against either or both forces.[3a]

They originate from the powerful sorceresses and wizard-queens of the aelven empires of the Realm of Ulgu and, to a lesser degree, Shyish that were forced seek shelter in Azyrheim during the Age of Chaos and where they later created their own covens.[1a][4][2a]

Many Sorceresses also maintain close ties with the Order Serpentis since the Age of Myth when the Sorceresses aided the creation of the first Black Dragons. Thus Sorceresses may ride these beasts into battle, hurling magical bombardments while their dragon steed attacks with claws and gouts of toxic fumes. [1a]

With the skill born of generations of study, Sorceresses unleash witchfires and bolts of eldritch energy that can whither the enemy forces to dust or intone blasphemous words of pain, phrases in long-forgotten tongues that cause wracking waves of agony to course through victims. When needed they won't hesitate to ritually slaughter their own warriors to fuel their spells. Noteworthy spells include Word of Pain and Bladewind.[1a]

They are famed for their supernatural charisma, able to bend others to their will and ensorcell them under their absolute control. Even Stormcast Eternals and supernatural entities not immune to their abilities. [3a][4][2a]

They often carry a Witchstaff into battle. When riding upon a Black Dragon they instead carry a Darkling Sword or a Witch Rod alongside a Witch Lash. Sorceresses always carry a dagger, that they can use to sacrifice their allies for magical power.[2a][2b][2c][2d]