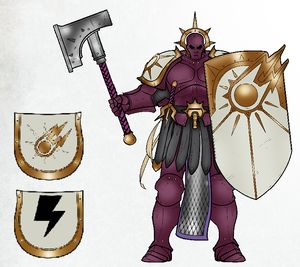 A Liberator of the Celestial Warbringers.

The Celestial Warbringers also known as The Seers of War, Masters of Portent and the Mystical Eye are a Stormhost of the Stormcast Eternals of the Second Striking, wearing magenta and white armor. They were the first Stormhost forged in the Second Striking and bear the sign of the twin-tailed comet as their symbol.[1][5a]

Due to their common heritage, their brotherhood is second to none and they take no greater joy than that of righteous battle. They laugh and hurl brazen insults at their enemies, giving them a fearless and infectious audacity that persisted even after being Reforged. Because of this they are able to defeat the most insurmountable odds many times and carry themselves to glorious victory.[3]

Each member of the Celestial Warbingers hail from the same mortal tribe of bold warriors. This clan claims to have foresight of their own unique doom.[3]

The Celestial Warbringers are tight-knit largely because the vast majority hails from the same tribe and even outsiders that enter the Stormhost are inducted into their ways as part of a family. Their ability to foresee their final demise has resulted in them known for being cheerful and finding joy in each moment of their god-given immortality as they plunge into any conflict knowing its not their time to die yet.[5a]

Their acknowledgement of their final demise keeps them closer to mortals compared to other Stormhosts making them flexible enough to deal with places such as Misthåvn. Having gazed upon the paths of future they have seen that suppression of harmless foibles could be as disastrous as letting all vices rule without restraint. Thus in the City of Scoundrels they allow the Fleetmasters' court to manage the city while they only intervene to deal with the most dangerous of narcotics and clandestine groups with sinister goals.[5a]

The Celestial Warbringers are masters of divination and tempestuous magic. Their sorcerous commanders constantly plot of the direction of future wars using Warscryer Citadels and orreries which is essential when armies march in the deceptive lands of Ulgu. The Stormhost's skill as oracles has resulted in their Lord-Commander the Golden Patriarch becoming Sigmar's own prognosticator. [5a]

When in battle they often deploy Sacrosanct Chambers who channel the storm's wrath with ease. Every action they take is foreseen and carefully plotted to achieve victory even when their actions appear to be bellicose. [5a]