Streets of the Living City

The Living City is a city in the Jade Kingdom of Thyria of the Everspring Swathe region of Ghyran and the first of the Seeds of Hope.

It was built by Alarielle herself after an alliance of Sylvaneth and several Warrior Chambers of the Ghyran Guard and the Hallowed Knights defeated Clan Morbidus and drove them out of the Hollow Forest and restore its forest. It took fourteen days and night of singing natural magic to make the city of great bulwarks of entwined ironoak and bedrock with towers and fortifications made of thorn-studded vines and song-forged metal. It stood atop a plateau made to watch over the forest. In recognition of the God-King's service to her people, Alarielle granted sanctuary to all free peoples within the verdant walls of the Living City. Since the Sylvaneth were too fey and mercurial to watch over the fortress, the Everqueen offered it to her mortal allies, providing safety in exchange for wardenship over the wondrous forest. Some feared this city, yet many accepted the offer. [1][4a]

During the event known as the Season of War when Chaos warbands, greenskin hordes and other forces laid siege to Sigmar's nascent cities the Living City saw some of the worst fighting. After a long and vicious campaign the city itself rose up to destroy the besiegers in the final Battle of the Awakening. Since them the Living City continues to expand but the continued tending of the druids of the Everspring Circle is necessary to keep infestations of bileworms and poxstingers unleashed by Nurgle-worshipping priests from spreading throughout the city's ironoak barricades.[4a]

After the Necroquake Tzallagor, a Magister of the Bluefire Pyrofane Cult sought to use the overflowing arcane energies to sabotage the heart of the Living City by casting off the illusions that hide them and lead his minions into battle. He summoned a Burning Head of Aqshy in the city and the spell caused enormous devastation, but rather than attack the Temple of Life, the spell turned on it's caster and consumed it and its entire cult. The spell is currently burning a path through the Globus Gulf.[3]

The Living City is open for all the free peoples and even the Wanderers, aelves who abandoned Ghyran during the Age of Chaos have settled in the outer quarters of the Living City. Several glades of Sylvaneth also have wargroves within the city proper with those of the Oakenbrow Glade being the most common.[4a]

Ironoak is the city's greatest export and is coveted by artisans and craftsmen from across realms. The material is also used to create arms and armaments for the city's forces. As all animal and plant life in Thyria is male and in Verdia female seasonally great migrations are made across the stamen-like promontories of the Triske Isles to sacred hunting and mating grounds. Most of the trade in the Living City revolves around these paths as hunters, skinners and other tradesmen follow them in search of materials to sell at market. This is tolerated as along as proper respect is given to nature and those who commit acts of great wastefulness or cruelty are punished by watchful Sylvaneth.[4a] 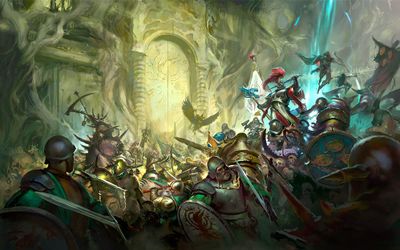 The military of the Living City combines Sylvaneth, Dispossessed, Wanderers, Free Peoples and Stormcast Eternals who are collectively known as the Viridian Shield. They strike from the shadows and are regarded as the stealthy vanguard from the Realm of Life. Forces of the Living City are trained to fight in the twisting labyrinth of the Everspring Swathe and rely on sudden assaults, barrages of missiles and flanking attacks to whittle down superior numbers. The thick woods surrounding the Living City is known as the "home beyond the walls", signifying their belief that their own natural fortifications are a mere extension of the great forests of Thyria.[2][4a]

A common tactic employed by the Nomad Princes who make up the majority of the city's military leadership is send Wild Riders charging towards the enemy. stabbing at their enemies and them disappearing. Should the enemy pursue they are ambushed and surrounded by aelven rangers who cut them down with their glaives. Even the enemies that are more cautious are wiped about hails if ironoak bolts from Freeguild Crossbowmen and magical bolts of flame from Sisters of the Watch. If the enemy force is overwhelming sacred horns carved from the shells of Wardroth Beetles are blown and sylvaneth that answer the call burst from the treeline to swiftly cleanse the foe's corruption from the land. Some wargroves even accompany the armies of the Living City when they roam abroad to serve the Everqueen's will in distant lands.[4a]

The main Stormcast Eternal forces in the city are the Ghyran Guard, sworn protectors of the Jade Kingdoms who have their main Stormkeep, the Oakenspire at the heart of the city and the Hallowed Knights who also have a minor Stormkeep and are equally influential in the city's military decision-making.[4a]