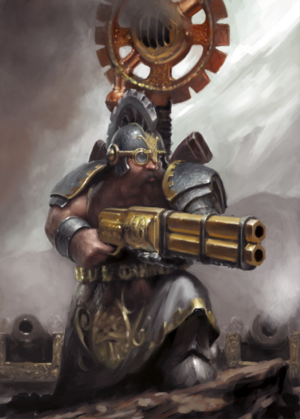 Cogsmiths are are peerless and grizzled combat engineers that maintain the war machines of the Ironweld Arsenal. Human or Duardin they delight in taking to the battlefield to observe their war machines in action. In battle they use their knowledge to increase the performance and killing power of the machines and perform the necessary repairs when needed. Enemies that interrupt them in their duties will find their hands always on their weapon and will often meet a messy end at the barrel of a shotgun.[1][2a]

Cogsmiths are the tinkerers and combat engineers of the Cities of Sigmar, responsible for creating the devices used by the armies of the Free Cities and repairing their war-machines.[2a] Some hierarchy exists among these peerless engineers as there are known to be Cogsmith-Captains.[4a]

Cogsmiths go to battle armed with a Grudge-Raker shotgun and Duardin Pistols for ranged combat as well as Cog Axe for dealing with enemies in melee.[1][2a][3]