Grungni is the Ancestor-God of creation, the Shaper of the realms and the lord of Chamon. [15a][17a]

As the mightiest duardin Ancestor-God, the God of Metal once walked the World-That-Was as a mortal. His direct descendants have endured to thrive anew in the Mortal Realms. [15a] 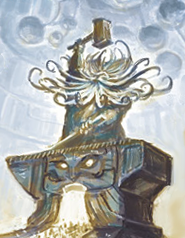 Of the Duardin’s hundredfold Ancestor Gods, Grungni is the mightiest to awaken in the Mortal Realms. [7d] Many ancient myths recount how the various duardin factions revived and choose their own patrons from their extensive pantheon. [4a] [4b]

Using the four Great Tethers forged by Grungni, Grimnir chains the solar Drake Ignax to the Land of the Chained Sun so that all might have light and fire. The godbeast becomes the second sun of Aqshy. [4b] [10a][7b]

As Grimnir rested from binding Ignax, a great evil befell the duardin’s Ancestor Gods. Known as the Thagduegi – the Great Betrayal – a wave of ignoble traitorous acts make the duardin pantheon break apart. [4b]

Following the Thagduegi, Grungni, now crippled in form, and Grimnir are left chained atop the tallest of the Iron Mountains in Chamon. [4b] [18a]

The Chains Are Broken

Venturing across Chamon, Sigmar stumbled upon Grungni and Grimnir atop the highest peak of the Iron Mountains, and manages to free them. [4b]

Both Ancestor-Gods pledged an oath to repay the favour in the way they saw fit. [4b]

After retrieving his freedom, the Maker brokered a lasting peace between the First Clans of the Khazukan and the Twelve Tribes of Azyr. [7d]

The Master-Smith also undertook the construction of marvels that eclipsed all that had come before them. Those went from the Sigmarabulum and the Anvil of Apotheosis to the reshaping of entire regions of the Mortal Realms. [18a]

Following is a list of known achievements accomplished by The Maker in these times:

The Nineteen Great Wonders of Chamon

The Nineteen Wonders of Chamon perhaps stand as the pinnacle of the many grand masterpieces created by the Forge-King during the Age of Myth. [18a]

Following is a list of the known Great Wonders of Chamon:

Before departing to Azyr to build the Sigmarabulum, Grungni founds the Khazalid Empire. This unequalled civilisation of engineers and craftsmen saw the Duardins work alongside Humans, Aelves, Gholemkind and many others. [9b] [18a]

Soon, countless Khazalid Empires were built into the heart of entire mountain ranges and subterranean caverns of every single Mortal Realm. Ruled by the worshippers of the Forge-King, they mastered the arts of blacksmithing and masonry, constructing illustrious underground holds festooned with gems, gold and gromril. [13a]

As the forebears of the Fyreslayers swore themselves to Grimnir, those of the Khazalid Empires took Grungni as their patron. [4c] 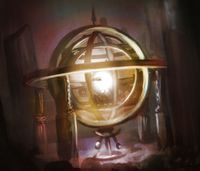 After repaying his debt to Sigmar, Grungni goes on a self-imposed exile, leaving the Khazalid Empires to fend for themselves. [18a]

Grungni valued self-sufficiency and autonomy amongst his subjects. He knew that his students could only be guided for so long before they came to resent his teachings. The Master-Smith recognized that only the fires of adversity could bring out the best in mortals. [7d] [14a]

His choice to let his people fend for themselves cost Grungni dearly; for it nearly sundered his hearth to watch his beloved duardin kin suffer from afar. [7d]

As the ancient karaks of the Khazalid Empires fell, many duardins sought sanctuary in the nascent sky-ports in a period called the Sky Exodus. Other Dispossessed duardins fled to Azyr to avoid the ravages of the Age of Chaos. Many duardin begin to resent Grungni for his perceived abandonment. [19a]

Grungni’s abandonment of the Khazalid Empires got some duardins out of their hiding places and forced them to evolve their technology, many taking to the skies to start new lives as the Kharadron Overlords. These sky-fairing duardin became everything Grungni hoped his people could be, arguably the cleverest and indisputably the most technically advanced of all nations in the Mortal Realms. The Kharadrons never forgave the Maker for abandoning them, however, and they now live in a mostly secular society entirely distinct from the greater duardin race. [7d] [16a]

Once the Gates of Azyr had closed, Grungni aided Sigmar by masterminding the creation of the Stormcast Eternals. Having perceived Sigmar's intention to free the Mortal Realms from the tyranny of chaos, the Shaper of the realms gave him the servitude of the Six Smiths and captured the Winds Celestial to make comet-headed thunderbolts that allowed Sigmar to cast bolts from the heavens.[1a][5a] [7d] [15a][1a]

When Grungni felt that his task in Azyr was complete, he vanished entirely from the councils of Sigmar. Passing his duties onto the Six Smiths that he had assembled to work alongside Sigmar, Grungni went into self-imposed exile. [5a] [7d]

Legends say that the Maker was overwhelmed by the guilt he felt at turning a deaf ear to his people’s prayers in their darkest hour. Others insist that he retreated to begin work on great engines of reclamation that will allow the Dispossessed to rebuild the fallen Khazalid Empires. [7d]

The Shaper of the realms dispatched adventurers to search for the Eight Lamentations.[2]

The Maker is also partly responsible for the foundation of the free cities. [15a] 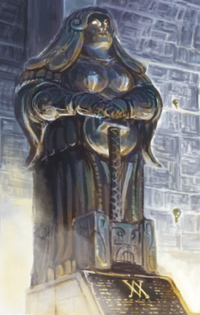 A statue of Valaya.

Rumours of Grungni’s return spread throughout the Mortal Realms. It is said that the Forge God has returned from his self-imposed exile and founded a new stronghold hidden beneath Chamon’s the mountains. Some whisper that, in solitude, Grungni is crafting something wondrous that will reunify the Dispossessed. [4d]

Reports differ on what this could be:

During the Siege of Vindicarum Be'lakor came face to face with a white-bearded duardin whose eyes blazed with the fires of the forge, and abandoned the battlefield. Few among the Kharadron Sky-Fleet knew that it was he who gave the information that allowed Imoda Barrasdottr to call the final motion at the Second Conference of Madralta.[21a] Fewer still knew the true identity of that ancient warrior - that of Grungni, the Great Maker, returned to unite his people at last.[20a]

Grungni's form expands and shrinks like a cloud of smoke vents from a chimney. His spade-shaped beard, composed of swirling ash, and moustaches of flowing smoke cover the lower half of his lumpen features. A thick mane of fiery hair cascades down his scalp, spilling over his shoulders and crackling against his flesh. His forge-spark eyes are like molten gold and are as vast and as hot as distant suns. [8a] [8e] [8d] [8b] [8c]

The Shaper of the realms towers over people in ways no mortal being ever could. Like smoke filling a flue, Grungni expands outwards through all of one’s perceptions – he is not simply there, but everywhere, in every moment and every thought. [8e]

The Maker often takes the shape of a duardin the size of an ogor, dressed in a stained, much-patched smock over his bare torso. He had thick arms and bandy legs that supported his bulk. He is remindful of the great statues the Dispossessed carve in their underground karaks.[2]

Other times, he appears as a stretched and swollen duardin head twisting in the flames. The Wondersmith embodies the flame and the smoke, his face made from heat and cinders. In such occasions, the Maker does not speak in words, but in sound: hammers striking hot metal, the hiss of molten gold, the roar of the forge. [8b]

The First Smithy is the seat of power of Grungni. It touches many realms, yet stand apart from them all. [7d]

In the First Smithy can be found Duardin, Human, Aelf, even a few Ogors, Grungni welcoming all who seek to shape metal, only barring an obvious few. Like many of the great powers, the Maker has a network that spans the realms. [8a]

The God of Metal teaches those who wish to learn the art and craft of smiting and in the First Smithy can be found Duardin, Human, Aelf, even a few Ogors, welcoming all who seek to shape metal, only barring an obvious few. Like many of the great powers, he has a network that spans the realms.[2]

With the bulk of Kharadron being largely secular, most Duardin no longer actively worship of the Ancestor-Gods.[7d]

Grungni’s followers are now few and scattered. While some warrior-societies are known to venerate a weapon or artefact crafted by Grungni, most of his remaining worshippers are either smiths or artisans. These servants of the Forge-King carry one or more master forged tools or weapons. [7d]

The Master-Smith can see all of his children in the flames of his forge.[8d] He is worshipped at the forge by doing, not in public, with words.[7d]

He has many apprentices, amongst those are: