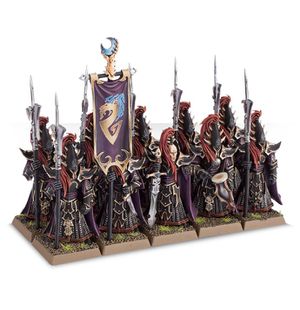 The Black Guard are the most skilled and ruthless warriors of the Darkling Covens who act as bodyguards for the Sorceress of their coven.[1a]

Their autonomy is meant allow them to swiftly anticipate and react to any potential threats to the Sorceress. Members of the Black Guard are amongst the few trusted by the rulers of the Covens and are expected to march without hesitation into the most nightmarish battles and battle the most horrendous abominations in the realms can offer. However they are rewarded well for their efforts being granted the finest luxuries and those who had served for centuries are even given positions of power within the Covens such castellans of the cults' lairs, masters of the spies and assassins or envoys to the lesser races.[1a]

They are led by Captains and are supported by Drummers and Standard Bearers.[1a][2a]

Unlike other soldiers of the Darkling Covens, the Black Guards are not mind-leashed through sorcery and instead are raised from birth to ensure absolute loyalty. The upbringing of those chosen to become Black Guards is harsh and consist of constant drill and deadly gladiatorial training against captured monsters and thralls resulting in very few making it through to join the Black Guard.[1a]

Each of the Black Guards are armed an Ebon Halberd and clad in ensorcelled plate. Their Halberds are crafted from cursed shadowsteel, a substance as light as parchment and as sharp as a Black Dragon's fangs. These can be wielded in one hand or two and set against an enemy charge or swept in arcs to decapitate and dismember.[1a][2a]