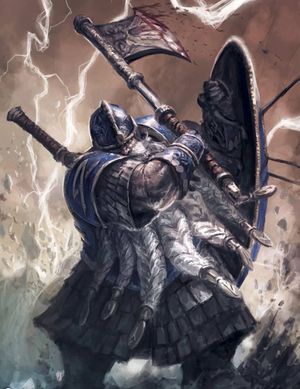 Longbeards are the veteran Duardin in the Dispossessed armies. They are the oldest of these armies with their long and full beards, which they are named for, being the testament of this fact. These veterans are solid, steady and skilled in battle. They are led into battle by a Old Guard and supported by a Standard Bearer and a throng Musician.[1][2]

They tend to grumble relentlessly about something and at both their enemies and allies alike. These complaints tend to have an effect on the battlefield and improve moral. Common complaints are that their fellow duardin should be "made out of sterner stuff", encouraging them to be brave, to "put their backs" into their attacks, to make their fellows hit harder, and that "there's too much magic flying around", which may result in the dispelling of a Endless Spell.[2]

Each Longbeard is armed with either an Ancestral Hammer, Axe or Great Axe, the first two often paired with a Gromril Shield. A unit with shields can form a shieldwall, which due to the duardin-forged steel is a night impenetrable barrier.[1][2]