The Duardin are a race that inhabit the Mortal Realms.

Most duardin are famed for their stubbornness, deference to age, taking umbrage at the least offence and believing that oaths and honour are very important.[4a]

The Duardin of old were excellent craftsmen, dedicating their lives to carving homes, excavating mines for precious metal and becoming better at metallurgy and forging. Should they need to do so, they would easily put aside their lives to fight off those who attacked them and then would later return to their vocations. The Fyreslayers are the notable exception with all their vocations and professions being dedicated towards war, as well as having a preference for living in volcanoes.[4a]

Although they age more slowly than humans, Duardin do normally grow old and die after a couple of centuries, usually living upwards to a 200 years. [5a]

They are invariably physical powerful with an average height of about 4'8". [5a]

Despite their apparent courage in all things, Duardin secretly dread becoming irrelevant or being rendered unable to affect the world around them. They also fear that if they fail to pass their wisdom to the next generation, their race will be cursed to repeat the same mistakes until it vanishes entirely into obscurity.[9]

Duardin surnames are a representative of their reverence for their history and ancestral bonds. To the lost Duardin nations and the Ironweld Arsenal that escaped to Azyr, these surnames are the only remaining fragments of long-forgotten homelands.[5a]

Kharadron surnames are usually formed from combining the name of a proud ancestor with a honourific like "-sson" or "dotr".[5a]

Fyreslayers identity is tied to their lodge and the same applies to their surname, which is their lodge name.[5a]

Some common names for Duardin are:

The Duardin built grand empires across the Mortal Realms in the Age of Myth, the most well-known being the Khazalid Empire and the First-Forged, but these, and many others, fell during the Age of Chaos. During this time many surviving cultures of Duardin, often led by Warden Kings, fled to the Realm of Azyr becoming the Dispossessed, it is said that their god Grungni wept tears to see how few remained. The Fyreslayers remained in the lower realms even after the Gates of Azyr were slammed shut, locking themselves in their holds. Others chose to escape the destruction of the Khazalid Empire by retreating to airborne outposts and mining platforms to form what would become the Kharadron Overlords, their lives now guided by the Kharadron Code.[1][2][4b][7b] 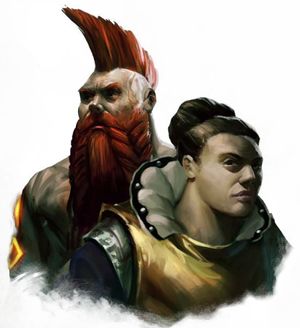 From left to right, a Fyreslayer male and a Kharadron female.

The following factions have Duardin members: