Spites are faerie-like, highly magical beings with an incredible diversity in temperament and form. They are some of the oldest allies of the Sylvaneth, often accompanying them to war, sometimes even end up being used as living wargear. Spites are capricious and playful creatures, something even the ill-tempered Branchwyches are known to indulge, but have a caring side. Should a Sylvaneth Grove be invaded they will relish in misleading outsiders and wanderers to their doom.[1]

There are many different types Spites often found around Sylvaneth like Treelords and Dryads.[1] 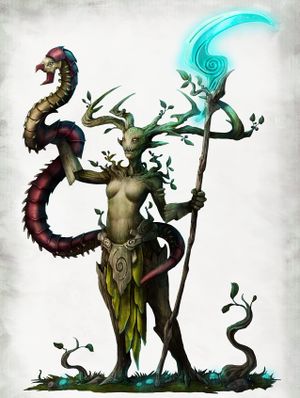 Bittergrubss are caterpillar-like Spites who often serve as faithful companions and protectors to Branchwyches. Large and vicious, Bittergrubs are equipped with powerful mandibles with which they will attack enemies and protect their Branchwych on whose shoulders they often ride. Devouring a substantial portion of an enemy will allow it to form a cocoon and over many days it will transform in a shimmering cloud of pollen which can restore even the most corrupted ground.[2a]

A newly born bittergrub saved the life of Nellas the Harvester, a branchwych of House Il’leath by devouring the infected bark that was killing her after she had saved her own home of Brocelann.[3]

Flitterfuries are spites that infest the body of Drycha Hamadreth and she uses their deadly, rage-feasting abilities to great effect.[1]

Quiverlings are insectoid spites that can often be found in the company of Kurnoth Hunters, especially those that use bows. They delight in being companions to their keepers and can often be seen carrying hollowed out logs or stumps on their backs, acting as makeshift quivers for their master's arrows.[5a]

They are very loyal to the Kurnoth Hunters they follow and will turn it's tiny claws on any that draw close enough to attempt to bring harm to their masters. They are also happy to carry arrows or other small items for their masters and even their masters' other companions.[5a]

Sniffer Spites are spites able to track down potent magical fungi. One of them is currently held in a cage and has been "persuaded" to track magical fungus by the Madcap Shaman Zarbag.[4]

Squirmlings are spites that infest the body of Drycha Hamadreth and she uses their deadly, misery-suckling abilities to great effect.[1] 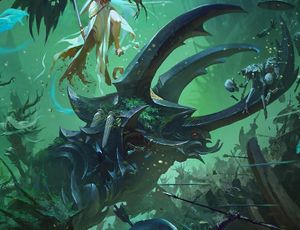 A Wardroth Bettle ridden by Alarielle.

The Wardroth Beetle is the personal mount of Alarielle and one of the largest spites. It is a living battering ram capable of breaking both infantry and fortifications. Should the Radiant Queen with to fly, the Wardroth Beetle will turn into a swarm glowspites, only to return to his original form when she lands. When the current incarnation falls, Alarielle can grow a new one using Soulseeds.[1]

Zephyrspites are Spites that grant Arch-Revenants their ability to fly.[1]