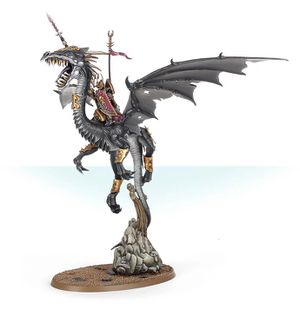 A Dreadlord on Black Dragon miniature.

Dreadlords are black-hearted Aelven warlords of Order Serpentis that ride upon vicious Black Dragons. Dreadlords are reputed for their cruelty and there are tales of the feared Dreadlords flaying alive those who have failed them in battle or feeding the unfortunate souls to their serpentine mounts. Warriors of the Order prefer to die at the hands of the enemy than flee from the field and risk a gruesome end at hands of their master. They are master strategists that delight in inflicting pain and terror on their foes, but also very selfish and arrogance, the last of which is only matched by their martial prowess.[1a][1b][2][3]

Each of them is a master of the sky that perform seemingly impossible feats in midair alongside their obsidian-scaled mounts. The relationship between Dreadlord and Black Dragon is not of master and beast but a symbiotic relationship between two killers where the rider provides the dragon with victims to slay and flesh to devour in return for suffering the indignity of bearing them into battle. Delighting in the opportunity to slaughter at will, Black Dragons shred their prey with wicked, razor-sharp claws, horns and fangs or spew forth great clouds of foul, noxious gas that choke the enemy by filling their lungs with bubbling blood.[1a][1b][2][3]

Dreadlords carry Lances of Spite which have an ensorcelled tip to punch through the thickest armour or an Exile Blade, one of the great heirloom swords of meteoric iron recovered from the doom of Narkath that can carve through gromril with a single stroke. On other hand they can wield a second Exile Blade, an magical Tyrant Shield to fend off incoming strikes or a Repeater Crossbow.[1a][1b][2]