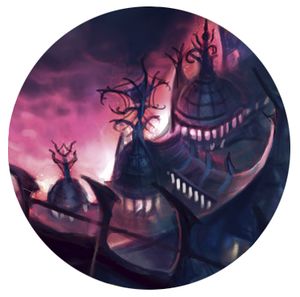 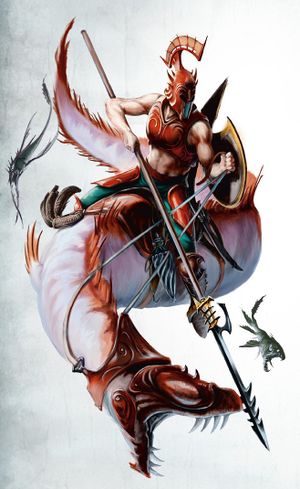 The Fuethán Enclave is one the greater enclaves of the Idoneth Deepkin, they dwell in the Mordacious Sound in Aqshy, their capital city being Mordgaile.[1a] In keeping with their home in the Realm of Aqshy they are well known amongst their kin as being bold, impetuous and aggressive and are distrusted by the other enclaves.[1d] When not at war they are renowned for their grim manner, rage bubbling below the surface, waiting to erupt at the slightest provocation. [1g]

The enclave often amasses powerful beasts for its raids and once devastated a formidable force of chaos worshippers by unleashing a flame-spewing spiny gilotán. Unlike some of their kin, when raiding for souls they kill all – old or young, apparently revelling in the slaughter of their prey. [1d] Warriors of Fuethán will pursue fleeing prey or enemies and are even found still stabbing and hacking at them some time after the subject of their ire has died.[1g]

Fleeing from the light of reason of their creator god, Teclis, the Cythai splintered into six factions and sought the deep places of the Mortal Realms. The Fuethán settled in the Mordacious Sound in the Realm of Fire. [1a]

Like the Dhom-hain, the enclave finds that other aelf souls are far superior to most other races and seek them out wherever they can, in the process attacking a number of war covens of the Daughters of Khaine who swear vengeance on all deepkin. [1b]

As Ionrach attempts to build an alliance to assist Mor'phann, the Fuethán nearly provoke a civil war between the enclaves.[1b]

The Necroquake in the Time of Tribulations results in massive assaults on all the deepkin across the realms. [1b]

Following the Necroquake, the Free Cities become too tempting a target and the Fuethán launch raids across a dozen coastal regions to claim the souls of their inhabitants.[2a]

Successfully raiding the outlying villages of Vanx Littoral, the Deepkin begin to retreat with their haul of souls but as they approach the ocean are halted by the vision of Syll'Esske rising from the waters. Hundreds of daemons join them and attack the soon retreating Idoneth and worse is to be revealed as mortals who worship the Dark Prince charge out of the dunes to complete the ambush. The day ends with the deamons feasting on the souls of both the raiders and their victims. [3]

The Redblades: Akhelian Guard who ride diamond-backed redfin Fangmora, famous for their feeding frenzies and who have depopulated whole areas of the coastlines of Aqshy. [1f]

They have control over a number of Whirlways that enable them to move and communicate across the Realms. [1e]