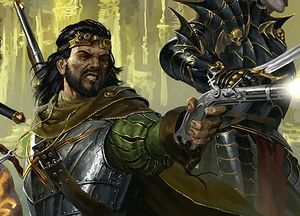 Image of Owain Volker from the cover of Spear of Shadows

Owain Volker is a human Gunmaster of the Ironweld Arsenal, Second Excelsis Expeditionary Force and later an agent of Grungni. [1]

Dark haired and bearded, he wears the traditional leather coat of a gunmaster as well as an intricately wrought breastplate, decorated with Sigmar’s thunderbolt, thick leather gauntlets and reinforced boots. He is armed with a long rifle, an artisan pistol and two repeater pistols holstered at the small of his back. He carries a satchel of shot-cylinders and powder-loads sand always keeps this within easy reach. [1]

Born into a powerful family in the Realm of Azyr he was noted as being was the youngest gunmaster in the Ironweld Arsenal at barely thirty winters old. It was often claimed that his mother, Catrin Volker, had used her position on the Grand Conclave of Azyrheim to promote his career, although he himself was the first to admit he had little if any political acumen. [1]

Jorik Grunndrak, Master of the Arsenal in Excelsis dismissed these claims of nepotism but also noted, it’s good to have influential kin. No duardin worth his beard would look down on a man for that. It’s only sensible, after all. Kin are the only ones you can trust. Volker’s mentor in his early career was the ancient duardin Oken, who had persuaded his sceptical mother to allow the young man to serve as his apprentice in the Arsenal. [1]

When the Skaven besieged the city of Excelsis, he fought hard in its defence and saw his friend, the duardin artillery engineer Makkelsson die and in that conflict he received a vision from Grungni. The god recruited him as an agent and sent him forth to search for the Spear of Shadows, one of the Eight Lamentations. [1]

Oken taught him everything he knew about the art of gunsmithing, what it meant to be a member of the Ironweld Arsenal, and the burden of responsibility that came with it. All members of the Ironweld learn the language of the duardin Dispossessed. [1]

Grungni himself enchanted Volker’s masterwork long rifle and his ammunition bag which are lighter than they should be. The ammunition bag is also enchanted by the god using Rune magic to ensure that his powder will always be dry, and never run low. [1]

He is a pragmatic but devout follower of Sigmar who is well regarded by many of those in the Arsenal – particularly the duardin whose sayings and philosophy he often extols and who note his care and attention to his tools and weapons as well as his propensity to be in the frontline. Unusually for a human he even enjoys duardin bread with its acrid tang and coarse texture. [1]

He was however uninterested in politics, to the distress of his ambitious mother - He could pluck the wings from a rotfly with an artisan pistol, but couldn’t navigate the sullen currents of influence within the Ironweld without three guides, a map and several torches. [1]