All of the Free Cities of the God-King's empire boasts a handful of Freeguilds. In many cases, a Freeguild will be structured into several regiments whose officers will serve under an overall commander.[4b][12][3a][23a] Freeguilders often operate as both a standing army and as city watch, sometimes regiments will alternate between active military service and guard service, though some cities assign specific Freeguilds to this duty.[4a][4b][23a]. The Freeguilds, and even individual regiments, will often develop their unique styles of combat, based on the environments and surroundings of the cities that employ them.[1e] Such as the coastal city of Anvilgard, which has several marine regiments in their employ.[1g]

The Prime Commander, a member of a Free City's Grand Conclave and supreme commander of its military forces, acts as the highest authority of a city's Freeguilds.[42]

The Guard is often supplemented with specialized units of Handgunners and Crossbowmen. Even the worst of a horde of Khornate berserkers can be put down by well-placed volleys of leaden shot or bolts.[1e]

The Greatswords formations are prestigious all across the Free Cities of Sigmar's empire and are renowned as some of the best soldiers in the Freeguilds. The Greatswords are recruited from the biggest and strongest veterans within the regiments. These warriors are clad in plate armour and wield massive zweihanders in battle. They are elite shock troops of the armies of the Freeguilds.[1e] But if these brave soldiers are the anvil of the Freeguilds, then the elite cavalry of the Fre Cities are the hammer. These cavalry units often consist of valiant Pistoliers and steadfast Outriders. The Pistoliers are typically young and brash popinjays who go into battle with a brace of pistols and long-barreled firearms, they are often seen patrolling the borders of their home cities in search of new foes to fight. The Outriders are an older, more grizzled class of soldiers who are used extensively for reconnaissance missions and other vital duties.[1e]

Though the overwhelming majority of Freeguilders seem to be Humans, other Free Peoples have been known to join the guilds such as Duardin and Ogors.[10b][11a][24a]

The Freeguilds are semi-autonomous military guilds found throughout Sigmar's Empire defending everything from meagre border outposts to the great fortress-cities that serve as capitals of Sigmar's Empire beyond the Realm of Azyr. These guilds vary in size, with some being little more than a single, understaffed company while others boast well over a hundred regiments.[6a][1e][11a][23a][23d]

The overall commanding officer of a Freeguild regiment can vary significantly, though most often they are simply known as Generals. Other titles of similar rank include Captain-General and Lord Marshal[4b][12][3a][23a][41a]

Occasionally a Colonel, a rank directly below that of General, may serve as the commander of a regiment.[30][40a]

Captains serve as the commanding officers of companies, and sometimes entire regiments.[3b][8a][28a] These companies are then often divided into platoons commanded by Lieutenants.[27a]

There are many Freeguild companies and regiments have specialized sergeant ranks. These include Lance-Sergeants, Line Sergeants, Marksman Sergeants, and Gunnery Sergeants. Gunnery Sergeants, such as those within the Lady's Justice and similar companies, command artillery units within a company.[5a][11a][15a][15c][15d][31a]

Occasionally Captains will serve as commanders of independent Freeguild companies.[11a]

The Golden Lions of Hammerhal Aqsha are known to have Impressment Officers, whose duties include recruiting new soldiers into the Freeguild.[23a]

The Sons of the Black Bear who have officers with the rank of Boyr.[5a]

The Accari Hounds were more akin to a loosely organized mob, commanded by officers collectively known as Chiefs lacking any traditional hierarchy. At the top of this hierarchy were the Dozen who served as the regiment's overall commanders and champions.[37a]

The second officer of the First Age Celestians regiment holds the title of Field Marshal.[37d] 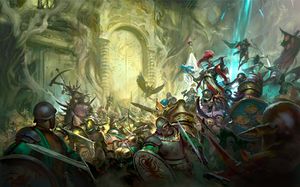 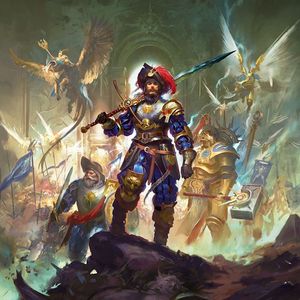 Other Freeguilds, Regiments, and Companies

The Freeguilds use a wide variety of heraldry including: