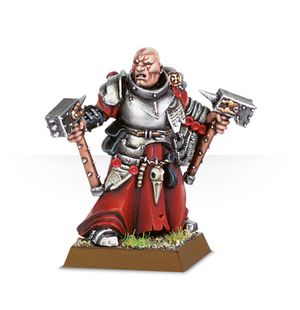 A Warrior Priest equipped with a pair of Sigmarite Warhammers miniature.

Warrior Priests are priests that fight in the Devoted of Sigmar armies.

Warrior Priests can go to battle mounted on a Warhorse or on a platform in an War Altar of Sigmar.[1a][1b][1c][1d]

Warrior Priests use their faith to strengthen their blows in combat, smite creatures of darkness with righteous fury and shield themselves from harm.They can tap into divine to unbind a spell or pray to Sigmar to receive Battle Prayers like Shield of Faith, Hammer of Faith and Healing Hands.[1a][1b][1c][1d]

There are some within the cities of Ghyran, notably Hammerhal Ghyra who maintain their faith in Alarielle or one of her aspects while taking on all other trappings of the Warrior Priesthood of the Sigmarite faith.[3a]

Arch Lectors are senior Warrior Priests that ride on the platform at the fore of the War Altars of Sigmar. They are armed with double-handed Sigmarite Greathammer or a Warhammer paired with a Staff of Sigmar, which is both a weapon and a badge of office. This senior Warrior Priest can try to unbind two spell at the same time. They can also pray for three Battle Prayers: Soulfire, Righteous Fury and Holy Fervour.[2a]