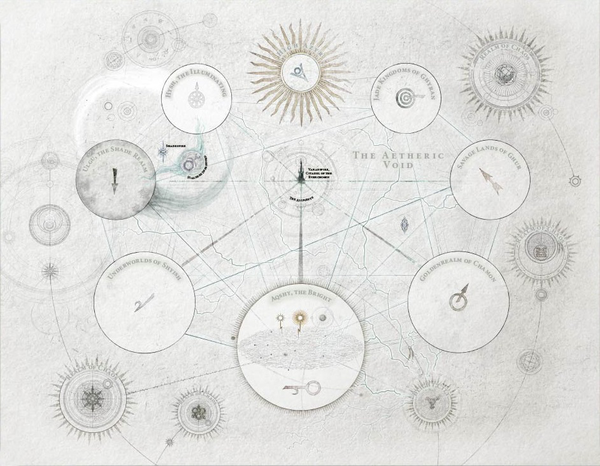 The Realmspheres in the Great Nothing.

"From the maelstorm of a sundered world, the Eight Realms were born"Needs Citation

The Mortal Realms are a group of eight planes of existence revealed to Sigmar by the Dracothion after the destruction of the World-that-Was during the End Times.[1a] The Mortal Realms are found within Realmspheres found in the Aetheric Void or the Great Nothing, a huge expanse like space made of loose unaligned magic.[9]

There are eight major Realms in total, along with some minor ones and the Realm of Chaos.

The magic of the Mortal Realms spread from the end of the World-That-Was, exploding through the cosmos, before cluttering back together in the Aetheric Void forming Realmspheres. Within these Realmsphere, magic started to crystallise and form landscapes. Some remnants of the broken world, came to settle in these landscapes like the Spear of Mallus and the Oak of Ages Past.[9][10]

The Twin Realms of Hysh and Ulgu

The realms themselves are not infinite in size, but the sheer amount of time it takes to traverse them, it would take entire life times to reach the end from its center, makes it practically so.[9]

At the center the realms is where the magic is in its most stable forms and because of it, it is one of the most settled with many races starting families, building cities and farming crops there. As long as they can stop invaders or the tribes of Destruction from ending their lives.[9]

The magic is at its most unstable forms at the Realm's End, also known as the Perimeter Inimical where a visitor may spontaneously combust, turn into vegetation or transform into a mechanical contraption depending on the magic of the realm. There are those that have tried to manipulate this unstable magic, but such attempts never end well. This effects makes it impossible to go farther than the Realm's End.[9]

Because of the extreme nature of the edges of the realms, Slaanesh has claimed many of these surreal territories for himself. This has lead to these places leading directly to Slaanesh's domains and his domain to bleed into the Mortal Realms.[15]

Connecting the each of the Realms are the Realmgates, magical portals that allow one to traverse the Aetheric Void safely. These come in many forms, from the more understandable, like gates and arcways, to the more esoteric, like mists and seas. Their ability to transport people through the cosmos, giving them enormous values to conquerors.[9]

The most important of these are the Arcways, eight gates from each realm that lead to the sub-realm Allpoints, or the Eightpoints as it was renamed after Archaon conquered and made his base, the Varanspire, there. The Chaos Gods want to corrupt these realmgates so they all lead to the Realm of Chaos, allowing them to take over all reality.[9]

Some of the known means to reach the realms are:

Trade is relatively new in the Free Cities since it was devastated in the Age of Chaos, the economy is largely focused on barter with conventional banking too difficult to pull off due to the dangerous and unpredictable nature of the Realms. The value of any given good is determined by its rarity and usefulness to the involved parties. For example, Gold itself has no inherent value and Realmstone is considered to have great value due to its magical properties.[12]

While there is no universal currency some cities possess a local currency. The following are several examples of these currencies[12]:

Since the arrival of Sigmar to the Mortal Realms its history has been divided into three Great Epochs.[3a]

When Sigmar arrived the realms were covered in the dew of creation yet much was already ancient with fractures kingdoms and portals between the realms.[3a] Dracothion found Sigmar hanging upon Mallus, the remains of the World-That-Was, and set it upon the Firmament.[7a]

After finding the Mortal Realms, Sigmar set to explore them, battling monster among many other great deeds. He raised the primitive humans and helped build great civilisations, building a great alliance with the help of friends and gods, both old and new.[1a] This golden age of Sigmar's utopia ended when this alliance broke down, thanks to trickery and the invasion of Archaon, his signs plaguing the realms long before. Nagash sought to rule alone, Gorkamorka was discontent with the peace, Tyrion attempted to capture Slaanesh while it was vulnerable and Grimnir died battling Vulcatrix.[2][6]

For many aeons the Chaos gods tried to violently entry into the mortal realms, but where always foiled by Sigmar's grand alliance. Only when this alliance was broken by a betrayal did Chaos managed to invade the mortal realms, beginning the Age of Chaos. [1c]

The horrors the dark gods set upon the mortal realms seemed paltry in comparison to the devastation they caused in the world-that-was. The free folk fought, but they were weakened by the fall of the alliance and the union of chaos followers due to the return of Archaon, the ender of worlds.[1c] Despite the gods' attempts at protecting the mortal peoples of their realms, Archaon managed to reduce them to savage tribes and broken kingdom, set about to ruthlessly exterminate them.[6]

Sigmar closed the gates to Azyr and left the other realms to their fates, not seen again for centuries.[1c] The other realms were forced to live in a living hell, frowned in gore and rot, were cities and settlements were torn down and spiked citadels were raised beneath blood-red skies. The God-King knew that fighting the Gods of Chaos was a losing battle. They were too united and powerful, that to fight them was to face certain doom. He had a plan to build an army with the help of Grungni. Plucking the greatest heroes of the realms into Azyrheim and reforging them into Stormcast Eternals.[1d]

The Age of Sigmar begins with the first strike against Chaos, the Stormcast Eternals being first hurled into battle in the Brimstone Peninsula in Aqshy. The Hammers of Sigmar, led by Lord-Celestant Vandus Hammerhand fought Korghos Khul and his army, the Goretide, and took the Igneous Gate, being the first of many conquests. The wars spread across the Mortal Realms, starting a series of events that would be known as the Realmgate Wars, as Sigmar made it a objective to capture as many realmgates as possible, finding many of them corrupted instead.[3b][5]

Sigmar desired to reform his pantheon of old and helped his old allies, like Alarielle and Nagash and besieged nations like those of the Fyreslayers. The Stormcast held a crusade to recover the Ghal Maraz from the Eldritch Fortress and tried to stop Archaon from enslaving the daemonic oracle Kianathus and the Godbeasts into his service. The Realmgate Wars ended with the fight for the Eightpoints.[5]

As Nagash was finishing the final touches on his Great Black Pyramid, dark omens and forbidding visions plagued the realms. Sigmar was finally pushed to act when Vandus came to him with his own troubling visions. In response Sigmar first reached into the skies of Azyr and sent hundreds of comets of celestium. He then sent forth the Lord-Ordinators to lay claim to these comets and raise Warscryer Citadels atop each to scry the future of the realms. Through the citadels they, as well as the prophets of Chaos and Destruction, foresaw Nagash's plan.[16a][16b][16c]

All of the great alliances sent forces into Shyish to attack Nagashizzar. Unfortunately they all came to the walls of Nagashizzar at the same time and began to fight one another in a six day battle that achieved nothing. Nagash had nearly completed his greatest work, but unknown to him a small band of Skaven assassins had breached the inner workings of the Great Black Pyramid and tampered with it disrupting the ritual. This led to the event known as the Shyish Necroquake.[16c][17]