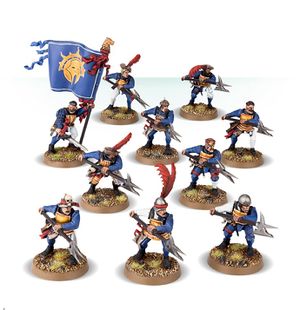 The Freeguild Guard are the militia of the Free Peoples, the Freeguild and the Cities of Sigmar. These organized and disciplined regimentss act as the mainstay and backbones of the military forces of the free cities. [1a][2][3]

Guardsmen and women act as watchmen, policing the often dangerous streets of the many cities of Order and enforcing all local laws, reflecting the huge variety of those urban centres in their uniforms, weapons and other equipment. They often forced to rely on weight of numbers to overwhelm the various enemies that they have to face. [1a][2]

They are led by a Sergeant and supported by a Standard Bearer and a Drummer. [1b]

Some may have armour, Freeguild Halberds, Freeguild Spears, which they can raise into a wall of spears, and Freeguild Swords paired with Shields for parrying and blocking. but others must make do with whatever Militia Weapons they can get their hands on including bows, clubs, blades, crossbows and even the occasional blackpowder firearm.[1a][3][4]