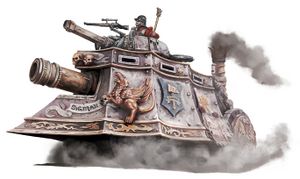 Steam Tanks are rattling, smoke-spewing war machines of burnished metal built by the Ironweld Arsenal by the fusion of Human and Duardin technology. Blasting away enemies with cannons and steam spewing guns, steam tanks rumbles across the battlefield and enemies that attempts to cleave through their thickly plated hulls are crushed in to a bloody paste beneath its immense weight.[1][2a]

Steam Tanks are armed with a fixed frontal Steam Cannon that fires bouncing cannonballs and a steam-spewing steam gun turret on top.[1]

They are iron and steel behemoths whose armoured hulls can ricochet arrows and whose crushing wheels are clad in metal.[3]

The tank can also be sent into overdrive by increasing the pressure of its steam engine, by pumping it to the valves and pistons, to boost its speed or the power of its guns but risks a catastrophic explosion as the metal buckles and overheats.[1][2a]

Steam Tank Commanders lead tank divisions upon the turret of his own steam tank and direct other tanks to unleash thundering salvos upon enemy lines. Commanders are also trained to repair their tanks when damaged in battle. The Commander is armed with a Repeater Handgun and a sword or rod alongside the Long Rifle attached to the turret of the tank.[1]