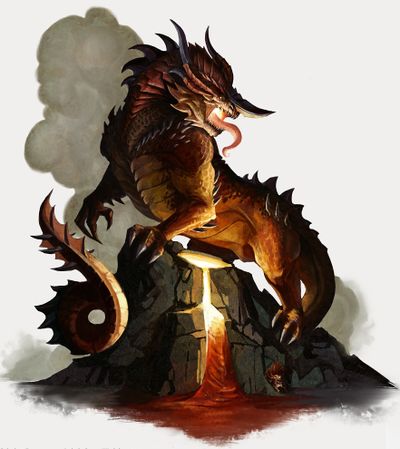 Magmadroths are enormous fire-lizards that spit searing blasts and whose blood scorches anything it touches. Only the greatest of the Fyreslayers, Auric Runesmiters, Auric Runefathers and the Auric Runesons can ride on the flame-topped dais mounted on these molten-skinned beasts.[1][4][7][9] They make their homes in volcanic caverns and their bodies pulse with heat of these places.[2][5][8] The fyreslayers also hammer Ur-gold on or through their scales.[6]

These great predators primarily attack using their Claws and Horns. Their Lashing Tails, which they use to communicate with each other, can also be used to slaughter lesser prey. They can also spew a wave of flaming bile that sears through armor as though it were wax. If they are wounded their bodies expel jets of fiery blood that scorch anybody around, which fyreslayers are usually experienced enough to avoid.[2][5][8]

The eggs of a Magmadroth take the form of a black orb.[11]

In the aftermath of the battle between Grimnir and Vulcatrix, the eggs of the first Magmadroths were formed. The Zharrgrim priests of the Fyreslayers discovered eggs and their Auric Runesmiters and Auric Runemasters were able to use their elemental connection with fire as well as a ancestral bond with Vulcatrix to hatch the eggs and negotiate an alliance with the Magmadroths.[11]