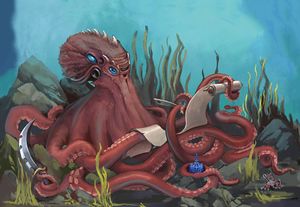 In the early days of the Idoneth history, when they were first establishing their Enclaves the Ochtar were, along with Deepmares, among the few underwater creatures that willingly worked with the Deepkin. [1a]

Ochtar are soft and seemingly defenseless creatures, that do not seem the type to be able to survive the harsh realities of the seas of the Mortal Realms. But beneath their docile appearance and prismatic eyes, there exists an alien intelligences of impeccable ability. They are capable of using tools and counting sums, abilities that have made them prized companions of Isharann Soul Wardens.[2a]

Ochtar are a species of both wild and semi-domesticated cephalopods, diminutive cousins to the Krakens, that are kept by the Idoneth Deepkin as familiars.[2a]

Wild Ochtar have learned to use tools and weapons by observing their domesticated kin. Thus they have begun scavenging shipwrecks for roguish armaments, with which they defend themselves. Serrated blades and spiked cudgels are among the most common weapons they have scavenged.[2a]

Ochtar make their homes all across the seas of the Mortal Realms, especially in those areas that the Idoneth have come to dwell in.[2a]

Ochtar are seen as prized familiar to the bureaucrats of the Idoneth Enclaves, known as the Isharann Soul Wardens, as they make for good companions, assistants, and even guards for those times that business takes the Soul Wardens beyond the Chorrileums.[2a]

An Ochtar familiar willingly follows Lotann, Warden of the Soul Ledgers of the Ionrach into war, aiding him in his counting whilst keeping enemies at a safe distance with a serrated blade and spiked cudgel. [1b]