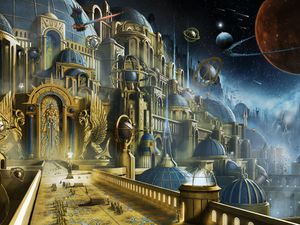 Realm of Azyr with Mallus and Sigendil

The Realm of Azyr, also know as the Realm of Heavens or the Celestial Realm, is one of the eight Mortal Realms. It's a glittering realm of glowing palaces ruled by Sigmar.[1] It is called the Hearth-Realm or Star-Throne by some Aelves, the the Fortress of the Lost or the Peerless Kingdom by many of its human inhabitants and Bastion by the Duardin of the lost Khazalid Empire. [20a]

From the distant ground of Azyr the skies look like an empty black pall, but from the edge of the Sigmarabulum one can see that the stars, multicoloured nebula and clouds of brilliant aetheric magic exist all around.[4e]

The symbol of Azyr, is the Comet of Power, a link to the celestial lore that influences the lives of the realm’s people. It is traditionally shown with the comet travelling skyward, symbolizing the transcendent and ever-expanding knowledge of the realm’s finest minds.[18]

A reality glittering like a swirl of heavenly jewels. The realm of Azyr is a place of wonder and endless possibilities, the embodiment of thoughts and ideas, of dreams, potential, imagination, prophecy, fate, weather and cosmic law and order . It is a place where deities, demigods, and mortals converse and philosophise, where civilisations and cultures prosper.[18]

Azyr has countless celestial bodies within it, from blazing suns and shining stars (independent from Hysh) to glowing moons and heavenly comets. Sentient storms rumble across the skies, all the while innumerable constellations shine across the cosmos.[18]

The realm is composed of countless sub-realms floating within it, all a wonder to behold. Some feature vast gleaming cities such as Azyrheim, with orreries and observatories crowning every tower, while those sub-realms steeped in celestial magic contain sights that could break a mortal mind. Mountains made of coalesced starlight play home to zodiacal demigods. Void-dust comets rain down upon lands made of glass, shattering them into shards that twinkle in the aether. Celestial energy flows in parabolas between sub-realms, creating both physical and metaphysical bridges. And above all, the Sigmarabulum shines like a crown in the firmament, a god-wrought ring of crystal and sigmarite surrounding the tortured orb that is the Broken World.[18]

The stars that hang in the firmament of the Realm are in reality massive concentrations of celestium, relics of the Old Ones made of stone and gold, and other cosmological bodies, infused with the magic of prophecy. Azyrite seers can study the movements and pulses of these objects to see visions of the future. These celestial objects are so bright they can be seen in the skies of other realms and are used to navigate.[26]

The architecture of Azyr is often composed of sky-piercing spires and gilded domes, marble colonnades and heavenly arches, while wonderous mosaics and beautiful glittering stained glass are common sites. Statuary tends to be of Sigmar, stormcast eternals, celestial bodies, cherubs, erotes and other angelic beings and draconic or leonin creatures. Iconography is most commonly of the twin-tailed comet, the cross of Sigmar, the twelve-pointed star of Sigmar, Ghal Maraz. As well as cherubs, suns, moons, stars, clouds and lightning bolts.[18]

This same archietecture can be found echoed throughout those settlements built by the Free Peoples in the other Realms after Sigmar's Tempest and the reopening of the Gates of Azyr. From the grand Stormrift Prefecture of Hammerhal Aqsha to the humblest of Strongpoints created by the Dawnbringer Crusades.[26a][27]

The cultures of the realm are many and varied, as its people hail from hundreds of civilizations both ancient and new that come from every corner of the Mortal Realms.[26][27a]

The Azyrite Calendar and Celestial Tongues of Azyr, both originating from the peoples of Azyr, have also become common place across the civilizations of all the Realms, especially in those places where Sigmar's dominion holds firm.[26][27a]

Fashion in the realm is represented with the colors often associated with Azyr. Golds and yellows for the sun, blues and white for aetheric void and the sky and silver for the moon. The inhabitants of the Realm of Heavens will often where trinkets and jewelry in the shapes of celestial bodies such as suns, moons, stars, and comets.[18]

Dracothion sensed the Slann and communed with these ancient seers, gaining a vision of death of the World-That-Was. The great drake cried for it's loss and the Slann followed the blazing path of silver stars that were his tears and reached the Realm of Azyr.{{Fn|10}

Dracothion found Mallus, the core of the World-That-Was hurling through Azyr with Sigmar barely hanging to it. He grabbed the metallic sphere and set it upon the firmament. He befriended Sigmar, showing him the hidden potals between the realms and with his guidance they explored the Mortal Realms.[4b]

After being revived by Dracothion and making landfall in the valley that would one day become the site of the Eternal City of Azyrheim Sigmar sets out to explore the Realm of Azyr. In his journeys he contends with many monsters and tyrants, freeing the mortal tribes they ruled over or preyed upon. These people, the Twelve Tribes of Azyr among them, become his first followers.[20b][26][27a]

Together with his followers, Sigmar builds the city of Azyrheim in the valley he first arrived in. This great city would soon become the jewel of his empire, grander than any city of the World-That-Was and amongst the greatest of the cities in all the Mortal Realms.[26]

After a time Sigmar and Dracothion would travel across the other Mortal Realms as well. Building alliances with various gods they met in their journeys, most of them familiar faces Sigmar knew from the World-That-Was.[20b]

After exploring the Mortal Realms, Sigmar flattened the peak of Mount Celestian. It was here that he built Highheim, which served as parliament of the gods and in there together with other gods, demigods and zodiacal monsters founded the Pantheon of Order.[4a]

With the aid of Gorkamorka, Sigmar cleared the many mountain ranges and peaks of Azyr of the monstrous predators that lived upon them. Though these monsters would not be driven to the brink of extinction until much later.[27a]

With the aid of his pantheon Sigmar creates the Sigmarabulum. A vast ring constructed around Mallus. Through Grungni's artifice, the metaphysical arts of Teclis and Tyrion, and Dracothion's power over the very heavens the device is made.[26][27a]

After the fall of the Allpoints, Sigmar took many refugees in Azyr before closing all the Realmgates to Azyr, just as the banners of the Everchosen could be seen on the horizon. The Gates of Azyr remained closed throughout the Age of Chaos, as the God-King Sigmar brooded upon his throne.[4c][14]

Some among the refugees are twisted by darkness and the hatred in their heart. These individuals are massacred in the Purge of Azyr, wherein all followers of Chaos, tainted monsters, Orruks, and Skaven within the realm are hunted down - any who Sigmar does not deemed worthy are killed.[4d][26] After this purge none of the mythic beasts of Azyr have any trace of corruption and those mortals that live in the realm live lives of opulent comfort and safety.[15][26]

Grungni captures the Winds Celestial and uses them to forge comet-headed thunderbolts for Sigmar to cast down upon his enemies.[4d]

Sigmar and Grungni conceived of the Stormcast Eternals and constructed the divine implements necessary to forge them in the Sigmarabulum. Their endeavours are hidden thanks to the ancient workings of Teclis, Tyrion and Malerion who aided in building the world-ring.[4e][26][27a]

After their creation the Stormcast Eternals trained every day to hone their tactics and strategies in the Gladitorium of the Sigmarabulum. They would also go far afield, to train by slaying the monstrous beasts that dwelled in the mountains of Azyr, the same beasts that Sigmar and Gorkamorka once hunted.[27a]

Sigmar sends forth his Stormcast Eternals in the event now known as Sigmar's Tempest. They wage the Realmgate Wars, slowly reopening many Gates of Azyr and reclaiming other Realmgates besides. After their victory many of the refugees (or their descendants) from Azyr resettled in many of the newly-built Cities of Sigmar in the other Mortal Realms.[4e]

At the conclusion of the Realmgate Wars, Sigmar dispatched every warrior he could, Stormcast, Aelf, Duardin and Human to try and secure the Allpoints, stripping even the Realmgates that led to Azyr of their defences. Various malign forces too this opportunity to attack and several - the Gryphonne Gate and Crystalgate were damaged. Luckily, the Slann had foreseen the danger and used their own forces to sweep away the various legions of Chaos. [19a]

Azyrheim, also known as the Eternal City, is a celestial city and an ancient stellar metropolis shining brightly at the heart of the Celestial Realm. It is the last of the great cities from the Age of Myth and within its walls man, aelf and duardin coexist peacefully. Many refugees from the Age of Chaos fled and they and/or their descendants still dwell here.[2a] Before Sigmar closed the Gates of Azyr, refugees from all the Realms fled to Azyrheim seeking safety, adding to the already vast population that included entire armies from the world-that-was. Directly above the walled city, far up in the mystic nimbus of the Heavens, shines the High Star Sigendil, beacon of the palace of Sigmar. Also called the First City and the City of the Lost. [4]

Sigmar rebuilt his armies here, preparing for the counter-strike against Chaos.[2b]

Mallus is the remains of the world-that-was set in the firmament by Dracothion.[2a] It is from here that Sigmarite is mined. Its energies make the stormcast eternals possible, and they are reforged in the Chamber of the Broken World.[2c]

Mount Celestian is the greatest of all summits in the Mortal Realms and whose peak was smashed by Sigmar during the Age of Myths to make Highheim, the city of the gods and the Court of the Gods.[4][9]

Sigmaron is the great palace city of Sigmar standing high above both the Celestial Realm's lands and the Mallus. From its highest spire Sigmar can look down on the whole of Azyr.[2a] The equipment of the Stormcast Eternals is forged here.[2b][2c]

The Sigmarabulum is fabricated ring of towers that surround Mallus, where Sigmar's forges, laboratories, armourers, alchemist factories, soul-mills, and other divine constructs can be found. It contains forges of the Six Smiths, were many of the weapons of the Stormcast Eternals are forged.[2c]

The Realm of Azyr boasts a rich and incredibly diverse populace, where many cultures and peoples have flourished since the Age of Myth. The coming of the Age of Chaos, which saw many peoples from Aqshy, Chamon, Ghur, Ghyran, Hysh, Shyish, and Ulgu flee to the Realm of Heavens saw this diversity bolstered even further.[26]

As such the Realm of Azyr has become a grand melting pot of hundreds of diverse civilizations and cultures, some of these were young and burgeoning cultures whilst others were old, some even able to trace their origins to the oldest nations of humanity. Some were even comprised of people cast adrift on the tides of time.[26][27a]

Whatever their origins, all of these peoples were united by a shared hatred of Chaos.[27a]

The Realmsphere Magic and spells associated with the realm of Azyr are known as Celestial Spells.[20c][20d]