The Seraphon are enigmatic creatures of celestial magic consisting of several subspecies of bipedal lizardfolk whose hatred for Chaos guides them to smite its scions, afterwards melting away without a trace. Of the forces that fight for Order, only the Stormcast Eternals may have an idea what the Seraphon are. [1] [9a] 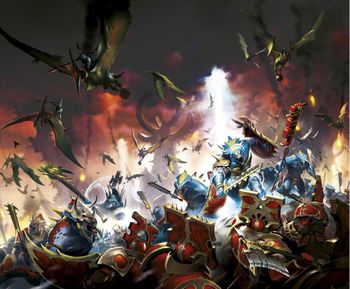 They watched their empire and homeworld be destroyed at the hands of the Dark Gods and escaped into the stars. The Slann guide the race through the void, hoping to reach a place beyond the reach of the Ruinous Powers.[7]

Every Seraphon belongs to a grouping known as a Constellation, similar to a civilisation with each having distinctive markings, culture and warfare but provide a tangible link back to the realm of Azyr, with names and markings reminiscent of one of the great zodiacal constructs that fill the upper vaults of the heavens, such as the Fangs of Sotek or the mighty Thunder Lizard. Countless constellations can be found amidst Azyr’s upper reaches or coalescing across the realms with populations ranging from a scant few to many thousands. Starborne constellations consist of grand temple-ships surrounded by spawning-vessels and other ziggurat craft commanded by the Slann to adopt a formation mirroring a particular star pattern to attract a measure of the celestial alignment's power. The Coalesced live in temple-cities but even after coalescence new warriors or workers will often be spawned beneath a recurring heavenly portent the Starmaster and skink priesthood judges to be most auspicious thus ‘constellation’ is also appropriate to the sub-divisions of the Coalesced.[9e]

The Seraphon worship a group of enigmatic and ancient beings known only as the Old Ones. The Old Ones are slated to have created the Seraphon, but a great catastrophe severed the Old Ones from their Seraphon children, an event the slann can only dimly recall. All that is known for certain is that they were beings of unfathomable intellect and power that possessed a great design for all of creation.[9a] The Seraphon themselves are sometimes worshipped as reptilian star gods by the primitive cultures of the Mortal Realms, seeing their arrival heralded by falling stars and strange constellations.[7]

The power of Seraphon waxes and wanes with the alignment of the stars, and whenever the stars of Azyr fall in perfect alignment their power waxes full.[7]

Seraphon are fundamentally creatures of flesh and blood but with celestial magic glimmering in their vein. Many Seraphon known as ‘Starborne’ exist on a slightly different wavelength to the other realms thus the Slann must bind the essence of the Starborne into reptilian form and and when slain they discorporate into blasts of pure starlight. Thus Starmasters can ‘conjure’ warriors directly from their temple-ships with but a gesture. While Starborne can interact with the tangible world, their deep connection to Azyr prevents them from achieving true physicality. However some Seraphon temple-fleets have descended and established permanent settlements in the Mortal Realms and as their inherent Azyrite nature mixes with the magical energy of that realmsphere the Starborne will eventually gain true permanence and become known as the Coalesced.[9a]

With the exception of the ancient slann, the Seraphon are not born but spawned the mystical pools within their golden temples. These spawning pools are permeated by the magic of Azyr.[9a]

The Seraphon have a cold but creeping fear that they are not following the Great Plan, an innate doubt that they might be misinterpreting it and that reality will fall apart due their misaligned actions.[10] 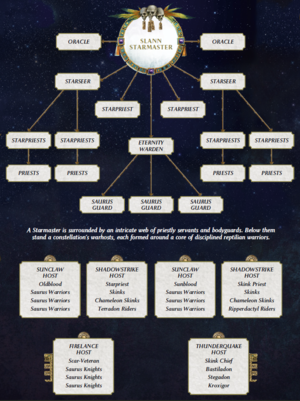 A constellation can comprise multiple temple-fleets or temple-cities operating over multiple realms with their own Starmaster to guide them with largest having several Slannfor each temple-fleet or city while lesser ones are guided by just one. It is the Slann that decide the battles of the constellations and their rule is absolute as it is divinely mandated by the Old Ones themselves. However Slann often allow their Saurus servants to take battlefield command which allows the mage-lords to focus always upon the wider conflict against the Dark Gods, as well as granting them the freedom to work their fearsome sorcery when they enter battle. Seraphon cohorts are organised into ordered formations known as ‘warhosts’ with those of the Starborne being called ‘starhosts’ and those of Coalesced being called ‘temple-hosts’. A constellation contains multiple warhosts, each formed around a particular Saurus or skink leader. The four most common warhost variations are each constructed around one of the primary Seraphon subspecies or their attendant warbeasts.[9e]

The armies of the Starborne reflect their nature as pure creatures of Order and their grand Eternal Starhosts comprise an assemblage of lesser starhosts, commanded by a slann and surrounded by his bodyguards. As more of a particular Seraphon subspecies gather, the heavenly power that infuses them is amplified, causing the coronas of energy that surround their weapons to blaze even brighter while more warriors emerge seemingly from thin air in prismatic blasts of light. When these celestially charged Seraphon gather in number the connection between the slann and Azyr grows stronger, allowing them to summon reinforcements all the easier. Coalesced constellations typically operate in the region surrounding their temple-city, or in lands connected to their domains by nearby realmgates. Their armies fight with a primal savagery, Saurus ripping apart their enemies whilst skink leaders use their knowledge of the local terrain to set up devastating ambushes. The slann who command the Eternal Templehosts, as the largest Coalesced formations are known, draw upon the stored power of the Astromatrix to reshape the very landscape into a weapon, their world-shaking magics transforming every thick forest or overgrown ruin into a primeval death-trap for their hapless foes.[9e]