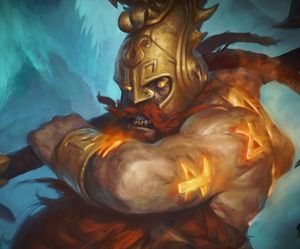 After more than ten thousand years, the warriors of the Angfyrd lodge set forth on a great journey to aid its ancestor lodge against Taurak Skullcleaver. The moved through a realmgate to the Ferroussian Sea, following the Orran river to the Titan's Edge Mountains. In those mountains, on the 719th day they found their sister lodge Sepuzkul also travelling to the aid of their ancestor and who were engaged in brutal conflict with champion of Khorne, the Griever.[1]

They swore an oath to avenge the fallen and joined with those from Sepuzkul to battle the bloodbound, losing many mighty fyreslayers in the ensuing war before the final battle at the realmgate they sought.[1]

Many of the lodge were killed, including the Runefather and some of the remnants joined with the also depleted Sepuzkul and moved on. on the four thousand and first day the reached the Red Mountains and the Bloodbound horde of Kar Thraxis the Ravager, the Devourer in Flame. Thirty fyreslayers confronted thirty thousand bloodbound. There the chaos champion offered them Ur-gld if they would kill his enemy - Taurak Skullcleaver, a kill he himself was forbidden to make so by his gods. [1]

After due consideration, they accepted his offer.[1]