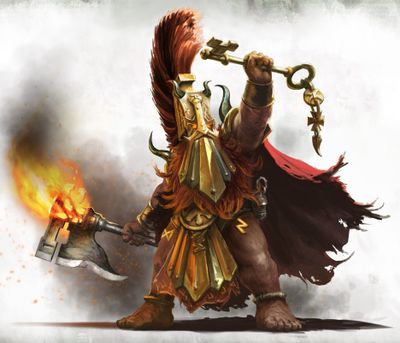 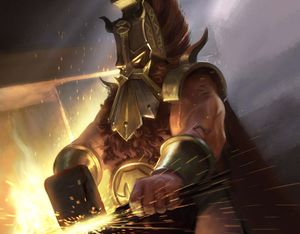 Auric Runesmiters are the war priests of the Fyreslayers and a messenger of their god Grimnir. They are able to channel the power of their god through the runes of Ur-gold, infusing their kin power with sonorous chants or by consecrating a small nugget of ur-gold over the runic altars and then consuming it. They have an affinity to ur-gold far above their kin, able to discern a single piece from within an entire chest of ordinary gold. They may earn enough respect to ascend to the status of a Auric Runemaster.[1][2a][3] When they set their feet on stone, they can command it to flow aside and make a tunnel that the fyreslayers can use to outflank their foes.[4]

Runesmiters are armed with Latch-axes and may also carry Fyresteel Throwing Axes. They can also fight with Runic Irons or bear Forge Leys, Ur-gold artefacts that expand the runic empowerment of a Runesmiter.[2a][3]