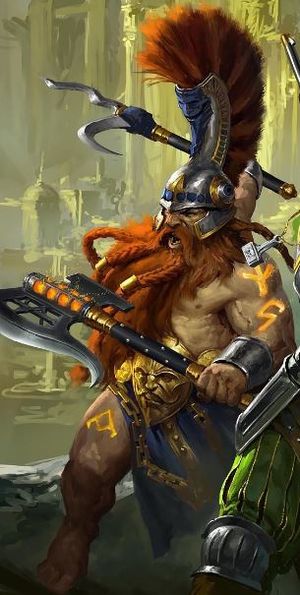 As with many Fyreslayers, Lugash is squat, thickly muscled and with his only concession to civilised sensibilities being a loincloth and wide belt made from the black scales of a great beast. His skin has many ur-gold runes hammered into it and his only armour is a helmet crafted in the shape of a rearing dragon, open at the top to allow his thick crest of crimson hair to spring forth. The plaits of his massive beard are bound in gold and capped by iron hooks that clatter dangerously with every turn of his head. [1]

His life before becoming a Doomseker has not yet been told, only that his lodge is no more, seemingly not just destroyed but also forgotten. He had several brothers.[1]

Grungni called upon him to seek out the Eight Lamentations with a number of others.[1]

A dangerously skilled warrior he carries an abundance of short-hafted fyresteel throwing axes, a cruelly barbed war-iron and a hook-bladed axe.[1]

Surly, argumentative and always apparently on the edge of violence, Zana Mathos, a sell-sword from Vindicarum, claimed that Fyreslayers need conflict the way humans need food and drink and without it, they go a bit crazy. [1]