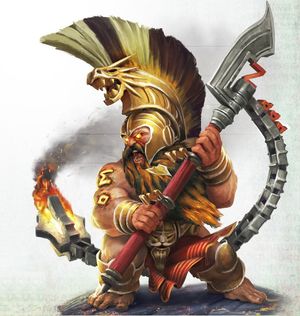 Hearthguard Berzerkers are the oldest and most venerable of the Duardin warriors of a Fyreslayer lodge. As powerful elite warriors, some of the strongest of their lodge, they are the bodyguards of the Runefathers and his Runesons in war.[3][1] They are the chosen champions of the Runefather, sworn to protect them and their lodges to their dying breath.[2a] They are filled with fiery determination and are eager to unleash the fury of the Fyreslayers upon their foes, powered by the Ur-Gold runes hammered into their flesh.[1] They are ancient warriors that have fought for the lodges for decades or centuries and are some of it's most experienced warriors. Their goal is to engage and smite the enemy first for their god.[4]

The leader of the unit wield a modified axe and a special helmet.[1] They are stronger than the other Berzerkers.[2a]

They wield Flamestrike Poleaxes into battle, heavy double-handed blades with a smouldering brazier attached on a length of barbed chain. These weapons swing in massive arcs and are able to puncturing the strongest armors of Chaos being subsequently set on fire by the braziers. When fighting larger foes they wield the double-handed Berzerker Broadaxes that can split a Troggoth in half. They also wield Fyresteel Throwing Axes and wear very little armor into battle, with their ornate drake helms being the most noticeable piece.[1][2a][4]