Daemons of Slaanesh are a faction of Chaos Daemons given form by Slaanesh, they are living expressions of Slaanesh's repugnant nature.[2a]

Daemons of Slaanesh are formed from Slaanesh's spiritual essence, they are both repugnant and beautiful in equal measure. Each daemon has a burning need to bathe in every excessive act they can conceive of and wish to bring about that need within their mortal prey. In terms of form the daemons of Slaanesh are often lithe and pale in complexation, the creatures also favour wearing expensive gems, metals and silks, they also consider tanned human skin as a fine form of leather. Daemons of Slaanesh are also ambitious and self-aggrandising, since they do everything they can to increase their standing within the eyes of Slaanesh. This varies from poisoned words, infighting, dark pacts or the pursuit of genuine excellence.

Not only do they cover themselves in jewellery, the autonomy of the creatures is beyond scope, many have multiple arms and appendages which is common within the ranks of these daemons, sometimes their limbs end in razor sharp claws or darting pincers that can easily tear a moral limb from limb. In some cases the daemons may even have tails which they used to wrap around their prey like serpents, squeezing the life from their victim. To a large extent the form of a Daemon of Slaanesh is essentially determined by their own vicious drives and terrible lusts.[2a]

The Daemons of Slaanesh are creatures of pure depravity, hence why they are attracted towards it. Commonly a way to summon the daemons of Slaanesh is to fill a surrounding area with the dark notion. This could be done within a feast hall, throne room or even the battlefield. In time, like an animal the creatures would pick up the scent and burst forth into reality to take part in the surrounding delights.[2b] 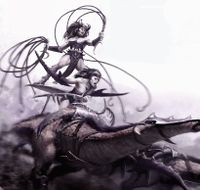 Chariots of Slaanesh are war machines piloted by Daemons of Slaanesh. Each chariot is slender yet artful in its construction, its frame lightweight enough to reach lethal speeds and perform daring manoeuvres, whilst also being robust enough to crash through enemy lines with ease. [1a]

The daemon-beasts that haul these chariots have an innate recklessness and sadism, their darting tongues lashing as they taste the blood-scented air. The Steeds steer their chariots into the thickest concentration of enemy forces again and again, fearing nothing save boredom and blandness. In this they make the perfect driving force for the chariots of Slaanesh's hosts. [1a]

The following are the known types of Chariots of Slaanesh: