From Age of Sigmar - Lexicanum
(Redirected from Savage Orruk)
Jump to: navigation, search 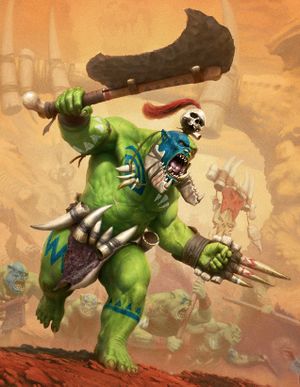 Savage Orruk Warrior are the main Orruk warriors of the Bonesplitterz warclan. Every Savage Orruk is a deadly, primitive warrior driven by the roiling energy of the Waaagh!. This core of violent magic causes them to bellow spontaneously and bang their weapons on their chests, forever restless to get to a fight.[1][3b]

They are led by Savage Bosses and supported by Icon Bearers or Bone Totem Bearer and Skull Thumpers or Skull Bashes.[1][3a]

When an orruk, from the various other clans of the Mortal Realms, wanders off to become part of a Bonesplitter warclan, he usually ends up in the Gob Rukks. Having abandoned burdensome things like metal weapons and his clothing, he will patch together a flint spear or chompa, and maybe, if he is especially talented, fashion a crude bone shield. He will also usually cover himself in scrawled tattoos or glyphs, each a promise of the great beasts he's going to kill or a victory he has already earned.[1][2]

As the Waaagh! energy builds, their eyes glow green, their muscles bulge as they grip their weapons, and their tattoos writhe with a life of their own. It is a sight that can put their foes to flight, enemies choosing the indignity of retreat rather than a brutal death at the hands of the Boneplitterz. This fury only builds as more orruk boys join the fight. A dozen Savage Orruks might hit harder and shrug off wounds as the Waaagh! energy grips them. When they number in the hundreds, however, the Bonesplitterz become an unstoppable avalanche of green flesh, landing blows that can split a man in two and ignoring horrific injuries.[1]

Savage Orruk Warriors can be armed with Chompas or Stone Choppas, or Savage Stikkas or Flint Spears, paired with Bone Shields or Crude Shields, primitive shields that offer them increased protection in melee.[2][3a][3b]