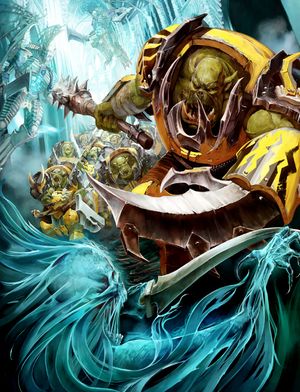 Brutes led by a Brute Boss in battle against Undead.

Brutes are Orruks who are the foot soldiers and the most numerous warriors of the Ironjawz. Wrapped in iron armour crudely beaten over massive green muscles, they are bigger and meaner than most other warriors of the realms. They are unconcerned with the complex things in life, their minds are solely focused on violence.[1][3][4][5]

They are led by Brute Bosses, grinning Orruks that like to wrap their hands around their victim's neck to give them a bashing.[2a]

They seek out in battle the most violent and biggest enemies to batter into submission, so they can smash their foes into bloody ruins. What cannot be beaten by violence, they beat in numbers with endless waves of small-minded aggression.[1][3][4][5]

Brutes prefer enemies that hide behind high walls, massive gates or in deep caves as they are unable to run away when the Ironjawz appear. Brute also dislike anything bigger than they are, be it a statue, a monster or even a tree, thus in battle they seek out the "big 'uns" and when one spots something worth clobbering a dozen more will join in. This has the unfortunate effect of mobs of Brutes piling on beast-riding lords in a heaving mountain of green muscle and bad breath until their victim vanishes from sight much to the horror of the enemy forces.[5]

Orruk Brutes are wrapped in armour beaten over their muscles and festooned with trophies of war like massive metal and bones jaws. They are armed with brutal weapons such as Brute Choppas in pairs, double-handed Jagged Gore-hacka and the massive Gore-choppas. Brute Bosses can carry Brute Smasha, Boss Choppa or even Boss Klaws which allows them to grab the enemy.[2a][2b][3]