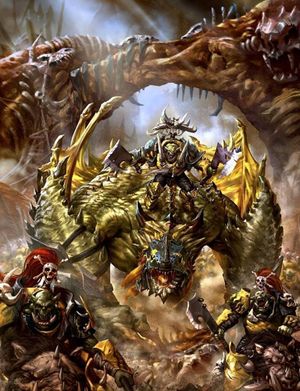 Gordrakk on his mount Bigteef leading an army of Ironjawz

Gordrakk, the Fist of Gork is the Orruk Megaboss at the zenith of the Ironjawz brutal empire. He stands ready to call Gorkamorka back into the Mortal Realms and usher in the next Great Waaagh!.[1] He rides a Maw-Krusha called Bigteef.[2]

A truely huge orruk with heavily scarred broad features, larger even than a Stormcast Eternal and clad in crude piecemeal armour with savage trophies hanging from every available surface . A pall of implacable fury hangs over the creature and he stinks of violence and brutality in a way that not even the followers of the Blood God can manage. Gordrakk is nothing less than the rage of a god given form. [5]

Ironjawz believe that during the Age of Chaos, Gork grew angry that the dark gods were trying to enslave them in the Realm of Ghur. His fist, easily the size of a continent smashed again and again into the Wildheart crushing Dreadforts into the ground. Left behind was a fragment of knuckle bone that was seared away with green fire to reveal the hulking megaboss now known as the Fist of Gork.[4]

Gordrakk’s first warclan was the Fang-krushas – with them he cracked open the Kaverlos Doom Engine and felled Archaon’s statue at the manticore realm gate. He gathered a horde of Warchanters at Grumbi's Furnace, calling a hundred thousand ironjawz orruks to him at the gares of the Dostev Magmahold. For the next six seasons of flame he assaulted the Fyreslayer hold until he destroyed all, leaving nothing but bones behind - then it is said that a great green grin lit up the entire sky and Gordrakk’s name was spoken by Weirdnob Shamans across all the Mortal Realms.[4]

He is known to the folk of the Crawling City of Shu’gohl as Obol’Ogar – the King of Death, the hillmen as Gordrakk the Mountain-cracker and to the riftcoast tribes as Bastion-killer.[4]

During the Realmgate Wars, he travelled to The Gargant's Graveyard with a vast horde of Ironjawz. There he fought and defeated Bloodbound warriors and champions as well as Lord-Celestant Zephacleas and Sharizad the Shimmering Countess as the latter sought to claim Marrowcutter one of the Eight Lamentations.[5] Later he destroyed the Chaos defenders of the Beastfens, taking control of The Growling Gates and then ambushing and killing the Strike Chamber of Pergus Brightshield.[4a]

Gordrakk carries two mighty axes, Smasha and Kunnin both of which speak to him, one is the voice of Gork, the other of Mork. They were once a single weapon - the Worldchoppa, but Gordrakk broke it into two so he could kill more and quicker.[4][5]