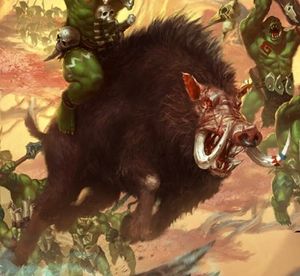 War Boars are a kind of boar that shares a bond with the Orruks of the Bonesplitterz and Greenskinz warclans.

The bond with Bonesplitterz clans trace back to the Age of Myth as they rode the beasts into battles and hunts. In hunts they use the boars' natural talent for snuffling out bones to lead them to their prey, while in battle, the boarboys often act as the teeth of a Gob Rukk attack, driven forward by the bellowing of the Gorka-boss.[1a]

Bonesplitterz attract new members to their herds of boars in several ways, including leaving out tasty bits of offal, setting crude 'boar traps' and torching woods to flush them out. An orruk must make sure his boar is properly mean and always ready to fight, so they feed their mounts on the bones of powerful beasts, though there is much debate which monsters' bones make for the most vicious mounts.[1a]

War Boars are often used as mounts by the following: