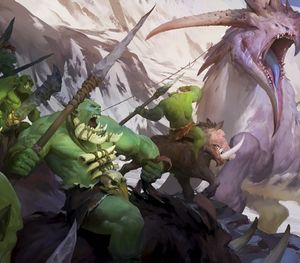 Savage Boarboys on the hunt.

Savage Boarboy is a unit of War Boar-riding Orruks of the Bonesplitterz warclans. They are the vanguard of these warclans crashing into their opponent using their flint spears or the tusks of their mounts.[1]

They are led by Savage Bosses or Savage Boar Bosses and supported by Boar Thumpers and bearers of Boar Totems or Bone Totems.[2a][2b][3]

In battle, the boarboys often act as the teeth of a Gob Rukk attack, driven forward by the bellowing of the Gorka-boss. Each rider urges his mount with kicks and yells, eager to be the first to lay spear and boar-tusk into the ranks of the enemy army. Like true hunters, they do not linger where their prey can strike back, and are skilled at hit-and-run attacks.[3][4]

Bonesplitterz attract new members to their herds of War Boars in several ways, including leaving out tasty bits of offal, setting crude 'boar traps' and torching woods to flush them out. An orruk must make sure his boar is properly mean and always ready to fight, so they feed their mounts on the bones of powerful beasts, though there is much debate which monsters' bones make for the most vicious mounts.[3][4]

Bonesplitterz and war boars share a bond that goes back to the Age of Myth, and Bonesplitterz ride them both into battle and on great hunts, using the boars' natural talent for snuffling out bones to lead them to their prey.[3][4]

The boars attack with their tusks and trample with hooves over any who stand in their path.[2a][2b]

They are armed with primitive and wickedly sharp Chompas or Boar Stikkas used to pierce both the beasts they hunt and their foes in the battlefield. These are paired with a Boneshields, primitive equipment that offers increased protection in melee.[2a][2b][3]