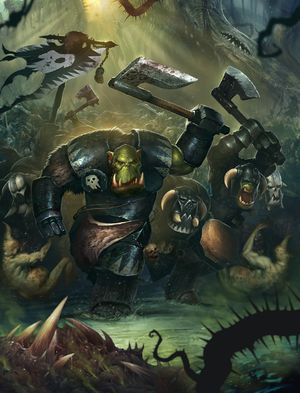 Ardboys crashing through Daemons of Nurgle.

Ardboys are units of Orruk warriors of the Ironjawz warclans that are composed of tightly packed ranked orruks from other breeds that are not Ironjawz but have proven their strength into battle to them. Ardboys are the only ones from other Orruks that are tolerated in the Ironjaw warclans as they are only inferior to the Ironjawz themselves. Clad in forged plated and wielding keen-edged weapons, they go into battle to emulate and impress their larger kin.[1][3][4][5]

Ardboys form their own mobs and fists within the Ironjaw warclans and unlike most Orruks believe in discipline, thus they have banners and drums to fight in ranks or march in lines. Most Ironjawz think Ardboys are a bit funny and do not consider marching to a drum to be relevant to smashing skulls but do admit that they know their stuff when it comes to war. Ardboys are led by by their own bosses who lead their boys into the fray with deafening yells. These bosses embody the both the brashness of the Ardboys and their pride at getting to fight beside the Ironjawz. [5]

In imitation of the Ironjawz, Ardboys plaster themselves in armour and tote Ardboy Choppas, which can be two-handed or paired with Smashas or large Orruk-forged Shields. While strong enough to break the spine of a man one-handed, they cannot beat iron into shape with their hands like the Ironjawz and instead they forge it from salvaged iron, displaying surprising skill for their race. [5][2a][2b]