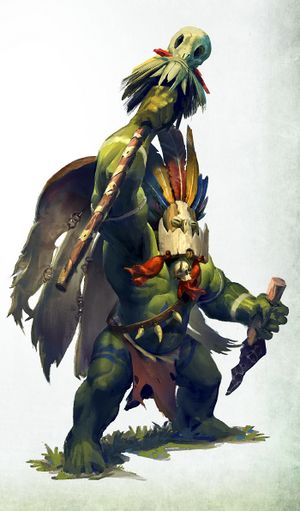 Wurrgog Prophets are powerful Orruk shamans and the undisputed mad leaders of the Bonesplitterz warclans.[2a][2b][3]

When a Prophet falls in battle, his place is usually taken by one of his Wardokks. This is not a sure thing, however, as only those chosen by Gorkamorka are able to become Prophets. This choosing can become visible in a variety of ways - ranging from a howling spirit clawing its way out of the dead prophet to force its way into the Wardokk, or a bolt of green lightning blasting him off his feet. Whatever form their gods favour takes, all Wardokks agree that they will know the sign when they see it.[1b]

Wurrgog Prophets are attuned to the will of Gorkamorka, able to see signs of him everywhere throughout the realms. Their sacred duty is to interpret his will to his followers, which makes them the undisputed leaders of the Bonesplitterz.[4a]. Even Megabosses respect the power held by the prophets, with some believing they can see the great grinning face of Gork (or Mork) looming over the shamans.[1a][2a]

Wurrgog Prophets, whilst appearing to be nought but gibbering lunatics, are much more. Behind their bizarre actions lies a strange wisdom that every Prophet possesses, as if they have been enlightened by some strange cosmic truth. Their visions often help them in battle.[2b][4a]

Behind all this orruk-ish wisdom, however, lies a capacity for devastating magic. Blessed by Gorkamorka, the Prophets are wizards of unpredictable and violent excess - to the point at which the prophet himself can never sure what precise form his spells will take once he loses them. When a Wurrgog summons up the power of Gorkamorka, the land cracks, trees are violently uprooted and the very earth of the realms is turned against their foes. Great green Fists of Gork might rain down from the sky to pummel enemies, or glowing feet kick victims off into the distance. Sometimes the aura of power emanated by the Prophet sends his lads into even greater heights of animal frenzy, causing the orruks to lose all sense of self-preservation, their minds filled with the roaring voice of Gorkamorka bash apart anything within reach.[1a][2a][2b][3][4a]

Wurrgog Prophets also possess an uncanny sense for beast spirits, able to follow the trails of creatures across vast distances in the absence of visible tracks, without knowing any further details of their quarry. This helps them lead great hunts, able to tell where biggest beasts can be found with one good sniff of the air.[1a]

The enchanted bones the Wurrgog Prophets wear entice squiggly beasts out of their hiding places. Most Bonesplitter shamans are accompanied by these little creatures, who accompany the Orruk at all times. These creatures protects the shamans by biting their foes with their fanged maws.[1a][2a][2b]

As both spiritual leaders and warlords of the Bonesplitterz, Wurrgog Prophets carry the most magical bones possessed by their warclan. Imbued with the essence of great beasts, these talismans and weapons hold vast power for the prophet to call upon. [1a][2a][2b]

When going into combat they are armed with Ju-ju Staves, Wurrgog Staves, Bone Shivs and Flint Knives.[2a][2b]

Many prophets wear masks made from marrowbone, heartwood or bloodstone, as they believe one of the best ways to harness an object's spiritual energy is to wear it on their face. These masks, and the faces behind them, radiate with the primal aura of Gorkamorka.[1a][2a][2b]