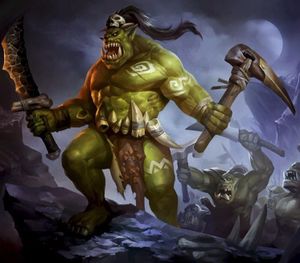 Savage Orruk Morboy are the completely insane and deadliest Orruk warriors of the Bonesplitterz warclans, considered even insane by the mad orruk warriors questionable standards. Morboys have a well-deserved reputation for acting recklessly in battle, the overwhelming power of Gorkamorka makes them have no regard for safety or self-preservation.[1][2][3b]

They are led by Savage Morboy Bosses or Savage Bosses and supported by bearers of Bone Totems and Skull Thumpers who drum Skull Thumpas.[2][3b]

Bonesplitterz don't really know why some orruks become Morboys, only that sometimes a greenskin warrior gets a funny look in his eye and starts rampaging about like a blinded ur-drake. The most likely cause, according to the wisdom of the Wurrgog Prophets, is that if a Bonesplitter kills a beast that has a potent spirit or is particurarly large, eats its flesh and wears its bones, the spirit can take him over. This usually ends with the Morboy getting a big tattoo of the monster to cage its power in his body. Certainly, when Morboys slay particularly large and fearsome creatures, they seem to go a little madder, as they absorbed a bit of its essence at the moment of slaying it. Whether this is true, or whether Morboys were always a bit insane before they became Bonesplitterz, is usually moot.[1][2]

Whether it is hurling themselves into the jaws of devastating cavalry charges, battering their way through spike-covered gates or taking on the largest, meanest-looking enemy champion they can find, they always show no fear and even less restraint. Morboys are so overwhelmed by the power of Gorkamorka that bosses have trouble telling them what to do, so it falls to the Wurrgog Prophets, Wardokks and Maniak Weirdnobs to guide them, with great difficulty, using spirit-talk of the Waaagh! - the only language a Morboy really understands.[1][2]

In battle, the Morboys are formed up into Kop Rukks, where Wardokks can keep a beady eye on them, before being prodded in the enemy's direction with predictably messy results. As the frenzied orruks hack and chop their way through everything within reach, the blazing green energy of the Waaagh! plays across the Morboys' tattoos, and it is as if Gork, or maybe Mork, himself is laying into the foe with wild abandon. This means that they grow stronger, more brutal and maniac as monstrous foes die, releasing their spirits, around them.[1][3b]

Armed with something suitably sharp or pointy in each hand, Morboys will scale anything between them and their victims, using their weapons as improvised climbing tools. Seeking out the biggest, hardest-looking monsters, most of the Morboys see which of them can stab their way up to the top and then ride the beast for the longest without getting thrown off. This reckless practise is known among the Bonesplitterz as 'deff riding'. Often, the Morboys only manage to give the monster a good stab before getting snapped up in hungry jaws or crushed under tons of scale and muscle. Sometimes, though, a particularly brave or lucky Morboy will manage to climb to the top of the monster and stick it in the brain, leaping clear to the raucous yells of their mob as the slain beast falls to the ground with a thunderous boom.[1]

Morboys are armed with flint blades, like Chompas and Toof Shivs. These frothing savages usually wield a weapon in each hand so they can 'hit stuff fasta'. They also use their weapons as improvised climbing tools so they can scale the flanks of large monsters like Drakes and Gargants, an act known as a Deff Ride.[1][2][3a][3b]