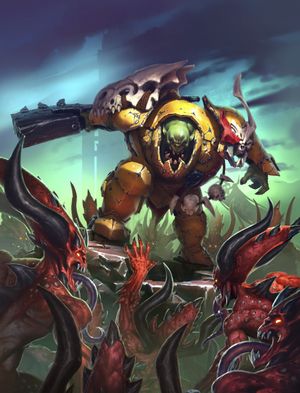 A Megaboss challenging a horde of Bloodletters.

Megabosses are the Orruk leaders of the Ironjawz and the largest of their warriors.[1][5a]

Ironjawz Megabosses are brutal warriors, regardless of fighting on foot or on a Maw-krusha. Competition among Megabosses is frequent and these contest generally devolves into a lot of yelling and inevitably, fighting. However their power rests in more than just muscle and iron, as focal points for the Waaagh! they have a bestial charisma that draws other Ironjawz towards them from all directions and the destruction caused by a gathering Waaagh! is almost as bad as the event itself.[5a]

They usually inspire the Ironjawz under them with a well-timed punch or a ear-splitting bellow.[2c][2d]

It is known among the Ironjawz that the more an Orruk fights and wins, the bigger they become, their muscles thickening and their teeth getting longer as their body grows. Megabosses are veterans of countless fights, shown both on their bruised knuckles and the nicks on their choppas. Understandably, then, Megabosses are massive, so huge they overshadow even the mightiest opponents. Other orruks know better not to mess with them.[1][4][5a]

Particularly angry orruks often subdue Maw-Krushas, often by yelling really loudly at them, so they can ride them as mounts into battle. Once tamed these beasts are given decorations like masks and bladed attachments for their tails. They attack using their tails, mighty fists, their destructive bulk and their bellows is strong enough to burst innards.[1][2c][3][5a]

These uneasy and belligerent pairings are so noisy and destructive on the battlefield and capable of turning entire formations single-handedly into pulverised meat. The kills they quickly rack inspire nearby orruks to fight harder. The beast will often need a quick reminder of their place with the liberal application of a boot to the back of their head. [1][2c][3][5a]

Megabosses wear the heaviest armour, which will contain the best bits of iron taken from bested foes and the battlefield. In addition to layers of the shiniest iron, Megabosses hammer on trophies of war, such as the skulls of tough-looking creatures, bits of broken weapons or symbols ripped from the banners of enemies that looked important. The arms of the armour may include Rip-tooth Fists, jagged gauntlets made out of heavy Pig Iron, often used to block blows, followed by a counter-attack with the twin-pronged spikes. [2a][2b][2c][2d][4][5a]