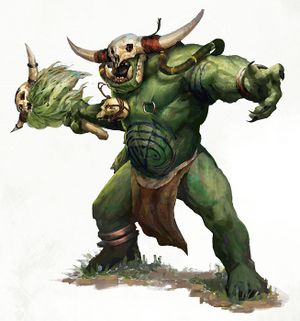 Wardokk are potent Orruk shamans that serve as the attendants, advisors and bodyguards to the Wurrgog Prophet in the Bonesplitterz warclans.[1][2]

Mad as a wounded Grunta, each Wardokk leads mobs of Morboys. These unhinged orruks are among the few in a warclan that can understand the Wardokk's ravings. Together they form the Kop Rukks, vicious Bonesplitter infantry hordes whose relentless savagery is used to punch through heavy defences and stubborn shield walls.[1][2]

As acolytes of the Wurrgog Prophet, Wardokks take part in beast rituals to called upon and channel the Waaagh! spirit and pay tribute to Gorkamorka. With wild dances, bone waving and plenty of strange noises, a Wardokk magnifies the power of his prophet and stirs up the energies in nearby mobs. Crackling green tornados whirl around the Wardokks as they invoke their magic, which manifests in different ways, depending on the nature of the ritual dances they perform.[1][2]

Some of the known rituals are:

As spellcasters they can also cast Arcane Bolt, Mystic Shield and Mork's Fist.[3a]

If a Wurrgog Prophet happens to fall in battle - or somehow blow himself up one of his Wardokks usually takes his place. However, this is not a sure thing, for no matter how skilled a shaman is he must be chosen by Gorkamorka. This choosing can come in many ways such as howling spirit clawing its way out of the dead prophet to force its way into the lucky Wardokk, or a bolt of green lightning blasting him off his feet. Whatever form their gods favour takes all Wardokks agree that they will know the sign when they see it.[1]