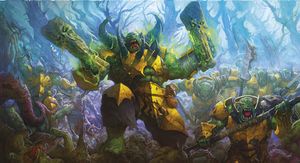 Warchanters are conduits for the power of the Waaagh!

A Waaagh! is word with several meanings. It mainly refers to the savage campaigns resulting when orruks go to war which is properly pronounced at ear-splitting volume. It is also used as a signature greenskin war cry that is used in a communal, guttural bellow. The Waaagh! energies also create various magical effects and this energy can be channeled by Shamans to unleash powerful spells.[1a]

The typical violence of an orruk invasion naturally results in a lot of bellowing, screaming, crashing and thundering which attracts even more orruks to the same location. This violence snowballs into a ramshackle crusade that can tear down an entire empire. Not all Waaagh!s are launched intentionally, in fact many civilisations have been destroyed by a Waaagh! that that started due to minor events such as an orruk nicking another's lunch, misunderstanding a perfectly good insult, or seeing a strangely shaped cloud in the sky, as any trigger of aggression results in the biggest orruk bashing his mates into something like a military formation which then gets pointed at the nearest non-greenskin stronghold in the search for a 'proper fight'. They are then joined by more and more hordes resulting in a massive military campaign.[1a]

When a Waaagh! is in full flow, it is similar to a catastrophic natural disaster. The massed orruks care not at all whether they are fighting to destroy the nations of Order, Chaos or even Death itself. There are two main reasons for orruk behaviour. The first is that the orruks believe they were made to fight and win regardless of who, how, where, when, why or what they fight, nor even which tools of war they fight with. The second reason is that orruks despise weakness, especially that part of weakness that seeks to manufacture its own strength in ways they do not understand. While some orruks are quite ingenious when it comes to making new ways of bashing, clubbing or impaling their victims, they see things like blackpowder weapons, well-made castle walls and duardin flying machines as 'cheatin'. They despise any methods by which those smaller than themselves try to rise to the top when they should really be violently put back in their place.[1a]

A Waaagh! with thousands of roaring orruks will be more powerful and long-lasting than the war cry a single mob of unruly orruks. The nature of a Waaagh! can also vary depending on the orruks that give it voice. The deep bass roar of the Ironjawz lends them raw strength, invigorating their fighting style which similar that of a battering ram to the point they easily punch through shieldwalls and snap limbs in their gauntleted hands as if they were no more than twigs. For Bonesplitter clans this invigorates the orruks with a manic, almost frantic energy which provides them with ferocity and lasting stamina to hack apart the enemy in a rain of successive blows, or charge down the colossal beasts of Ghur.[1a]

When the varied clans raise their voices as one putting aside their difference they become a pure expression of all that is orruky and fierce. This is known as a Big Waaagh! which sends Ironjawz and Bonesplitterz alike into a state of such furious battle lust they can break an enemy army in a single charge. Sometimes even the land itself comes alive, the earth grinding, trees uprooting and skies turning lurid green. The effects of Waaagh! not only affects greenskins of all stripes and nations, but also ogors, gargants and even troggoths, uniting the savage hordes in a single cataclysmic assault.[1a]

Grots are too puny to get a proper Waaagh! going on their own, their voices can't bellow loud enough, and their natural inclinations are more spiteful than boldly aggressive. However loonstone is notable for its ability to absorb Waaagh! energy and leaders of the Gloomspite Gitz are known for stealing the energy generated by orruks through loonstone which is then unleashed among grots to create a false Waaagh!.[2a]