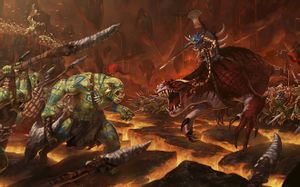 Savage Big Bosses are the biggest and meanest Orruks of the Bonesplitterz warclans, having battered and bashed their way to lead all the orruks they can see.[1][2a][2b][3]

These massive and intimidating heroes with huge bulging muscles lead by brutal example, carving a bloody path through their foes. Their impatience and manic fervour inspires any nearby Bonesplitterz and with just a gutural bellow and a swing of their axe they can order an all-out attack.[1][2a][2b][3]

While the Wurrgog Prophet is in charge of the warclan, the big bosses keep the boys in line and lead the charge in battle. There can be many big bosses in a warclan, especially larger ones. However, there will usually only be one Gorka-boss and one Morka-Boss. These are chosen by the Wurrgog Prophet for their fighting talents, and just like the constantly fighting halves of Gorkamorka, the two combine cunning with cunning brutality.[1][2a][2b][3]

Whilst a Gork-boss and his boys hammer the enemy in close combat with chompas, the Morka-boss and his boys hit them while they are looking the other way, or fill them full of arrows. In both cases, the Savage Big Bosses personally wreak mass carnage on the battlefield. Most important to the prophet is that his two most powerful big bosses, like Gorkamorka, are in constant competition with each other, and so never think too hard as to why they're letting the prophet tell them what to do.[1][2a][2b]

They also carry some of the most potent bones the warclan possesses, which both leads to and reinforces their position of leadership.[1][2a][2b]