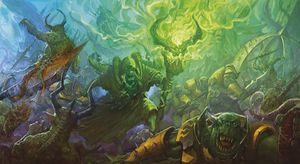 A Weirdnob Shaman empowered by nearby Ironjawz attacking Daemons of Nurgle.

Weirdnob Shamans are the potent, bizarre and unpredictable Orruk shamans and wizards of the Ironjawz warclans. They channel the power of the Waaagh! with devastating effect, crushing enemies under gigantic feet or caving their faces in with crackling fists.[1][3]

Weirdnobs consider themselves to be the 'wise orruks' of their warclans. However, in practice, their advice revolves entirely around the swift application of violence. This includes healing battle-wounds, finding new weapons, or deciding what the raging horde of Ironjawz should knock over next. Regardless, Ironjawz will believe these shamans speak with Gork's (or possibly Mork's) voice. Since the coming of the Arcanum Optimar, also known as the 'time of Ded Killy Magik' amongst the orruks, there has been an increase in the number of Weirdnobs amongst the Ironjaw warclans, who have helped provide devastatingly powerful, and lingering manifestations of the Waaagh!.[4a]

The Weirdnob are specially capable of channelling the wildly unpredictable, savage, violent and untamed magic of the Waaagh! for having the least shreds of sanity, even amongst the Ironjawz, already reputed for having little of it. As the energies flows through them they have little control of their bodies, twisting, twitching, staggering and gibbering as they stare at sights only they can see and talking to seemingly nothing. The energy of the Waaagh! spills from their eyes in crackling green light.[2b][3]

Their power grows stronger the larger the gathering of Ironjawz around them, channeling the Waaagh! energy emitted by them. In battle they release this power with glee, through what exactly they will cast is entirely unpredictable. Some of their commons spells are the Green Puke which makes them vomit forth searing ectoplasmic energy that seem like a particularly smelly gust or summoning forth the Foot of Gork the size of a mountain to stomp on their foes. They've been also known to be able to summon glowing green fists and rivers of lethal force to assault their foes.[2a][2b][3]

Bonesplitterz generally look down upon the Weirdnobs of the Ironjawz. To the Bonesplitterz, Weirdnobs are perceived as being less in tune with the will of Gorkamorka than their Wurrgog Prophets. However, the Ironjawz counter that the Weirdnobs ability to unleash streams of green ectoplasm from their eyes and mouth, and ability to summon the fists of Gork (or possibly Mork) is as in tune with the Great Green God as one could could. Nevertheless, when joining forces in battle, both Ironjawz and Bonesplitterz react to the magical outbursts of the Weirdnob with howls of savage delight, united in their love of wanton carnage.[4a]

These Orruks can defend themselves with their smouldering Waaagh! Staff.[2a][2b][3]