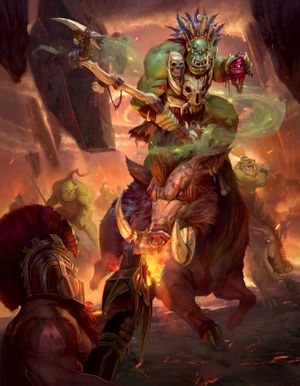 Maniak Weirdnob are Orruk spellcasters of the Bonesplitterz warclans. Having the power of Gorkamorka rattling around in your head, weapons and tattoos can crush the sanity of even the strongest-willed orruk. In the case of the Maniak Weirdnobs, their constant connection to their god has driven them completely and irrevocably mad.[1][2a][2b][3]

As a Maniak Weirdnob barrels off into battle frothing and howling atop his war boar, he calls out to the soul caged in his staff as it writhes and snarls inside its bony prison, a spell known as Bone Spirit. To onlookers, a swirling green shadow in the shape of a giant boar, claw or dragon - depending on the nature of the trapped spirit - envelopes the weirdnob. Nearby Maniaks feel the beast's spirit fill them, and for a moment, they forget they are greenskins. Animalistic rage consumes their minds, and they become a pack of slavering predators. Once loosed, only the magic of the Weirdnob can bring them back to their senses, otherwise they will remain lost to the beast spirit.[1][2a][2b][3]

These unpredictable spellcasters are sometimes created when a Wardokk or shaman kills a beast with a really ferocious spirit, like a Grunta or Maw-krusha. From the remains of the creature, they fashion a bone stave to contain the monster's soul. Bucking violently in the Weirdnob's grip, these bonebeast staffs are potent tools indeed, and only a Maniak Weirdnob has any hope of wrangling their furious magic.[1][2a][2b][3]

They ride to battle on feisty, maddened and hulking War Boars, who attack with their tusks and hooves.[2b][3]

Bucking violently in the Weirdnob's grip, these bonebeast staffs are potent tools indeed, and only a Maniak Weirdnob has any hope of wrangling their furious magic.[1][2a][2b][3]