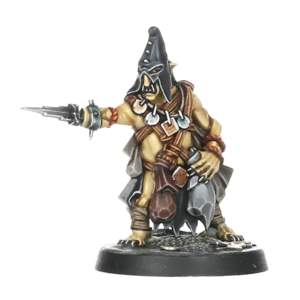 Krookgrin is a Hobgrot of the Grinnin' Blades and the malicious paymaster of Da Kunnin' Krew. As long as he stands the rest of the crew will not desert him and the grots will be kept in line.[1][2]

He and the rest of his warband were hunting a Bog Wyrm in the lakes of the Misted Isles, when they witnessed the creature disappear into a drain. Investigating the disappearance the warband ended up falling in the Harrowdeep. The warband is trying to find a way out of the labyrinthine caverns so they can bring the rest of the boyz to settle it.[1][2]

Krookgrin is armed with a Krule Dagger and throwable Firebombs.[2]