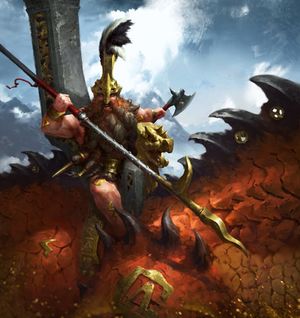 An Auric Runeson on Magmadroth.

Auric Runesons are the children of the Auric Runefathers and the heirs to their throne of a Fyreslayers Lodge. They are splendid warriors and the future of lodges, hunting down powerful foes in the name of Grimnir, in their agerness to become heroes in their fathers eyes. They are hot-headed and aren't shy to prove their skill and fearlessness in combat. Their thirst for Ur-gold is prodigious and many fyreslayer vault are full with trophies collected by these nobles.[1][2][3]

They can be armed with Ancestral War-axes or Wyrmslayer Javelins, large missiles designed to take out large creatures with hooks that catch on thick hide before gouging deep. Regardless of what weapon they use, they always carry Fyresteel Throwing Axes. Some Runesons also ride Magmadroths into battle.[1][2][3]