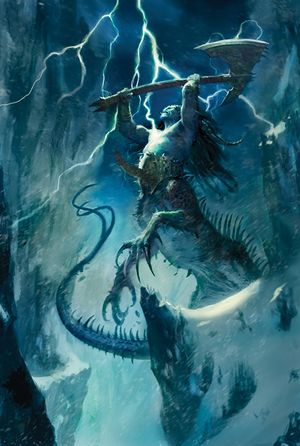 Dragon Ogors are a race of centauric beasts, half-drake below the waist and half ogor above it, bound by a pact to servitude to the Dark Gods. Their army is known as the Thunderscorn.[1]

Rumours say that the Dragon Ogors long ago, before even Mankind was born, made a dark bargain with the Dark Gods. The gods would grant them eternal life in exchange for their everlasting servitude. This pact has lasted aeons and is yet to be fulfilled.[1]

Dragon Ogors have the sheer size to fight off any foe, which they do with a their bestial faces set in a grim scowl while roaring and barking in their ancient tongue.[1]

Their very powers are fuelled by electric storms, easily able to be invigorated and healed by the lighting of their homes. This make them a potent weapon against the Stormcast Eternals.[1]