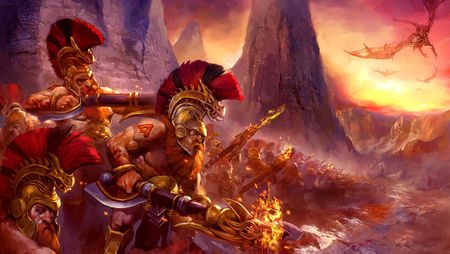 A frontline of Auric Hearthguards.

Auric Hearthguards are the protectors of the forge-temples of Fyreslayer Duardin and it's priesthood.[2a][3] The trusted custodians of a Lodge's magma-vault, they are the elite that have the honour of protecting the Ur-gold earned by their brother, also guarding the spirit of Grimnir.[1] They are ancient warriors that have fought for the lodges for decades or centuries and are some of it's most experienced warriors. Their goal is to engage and smite the enemy first for their god. In battle, traditionally they fight alongside Runemasters and Runesmiters, protecting them from harm.[4]

Karls are the leaders of these units, stronger than their brethren, their rank marked by their modified helm and magmapike.[5][6]

They march to war carrying Magmapikes, magical glaives that spew molten rock searing, melting and igniting almost everything. Those that survive find themselves trapped in the cooled, solidified magma, the Hearthguard then move in to give them the finishing blow with it's bladed horns. These weapon are crafted in the heart of their forge-temples and are imbued with runes of fire that grant it it's abilities.[1][3][4] They wield minimal armor, with their ornate drake helms being the most notable piece of it.[1] They also often use these weapons to ensnare wild Magmadroths.[2a]