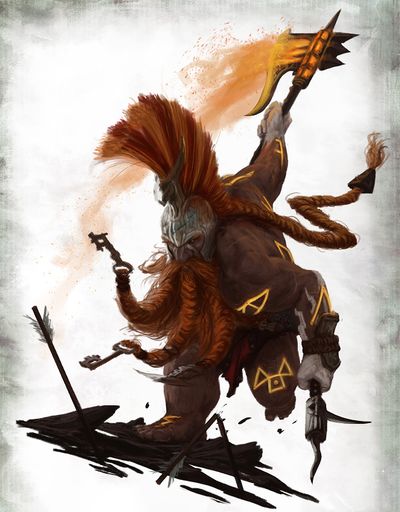 A Doomseeker from the Age of Sigmar RPG by Cubicle 7.

Doomseekers have forsaken their birth lodge and sworn an oath to wander the realms alone. [3a]

A Doomseeker takes the barazakdum — the doom-oath, some are warriors who have disgraced themselves in battle and this can be the fate an Auric Runeson who fails to rise to Runefather, but also refuses to bend the knee to a brother. Some are survivors of lost lodges, having seen all their kin fall and still others seek to atone for some crime. [3a]

On occasion a Doomseeker becomes Soulbound, preparing for an even mightier doom in a worthier cause but also as it greatly strengthens them against Glimmerlust. [3a]