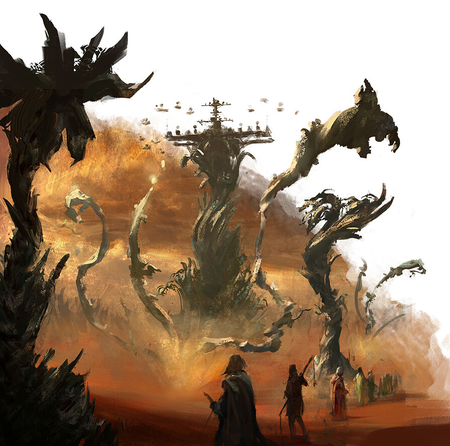 A Kharadron Outpost located along one of the many trade routes of one of the Lands of Gold.

The Lands of Gold, also known as the Realm of Chamon, are one of the eight Mortal Realms. Transmutation is law within Chamon's firmament, with places such as iron deserts, bronze mountains, seas of silver and plains of brass being a common sight.[1][2][21d]

Formerly home to the Khazalid Empire.[22b] Colossal wars for supremacy over Chamon's domains are being led by the Kharadron empire against the disciples of Tzeentch. Before Sigmar's return, the Kharadron managed to turn the tides at the Battle of the First Coalition.[23b] They now hold near-total supremacy over the skies of the inner Spiral Crux[21b] and stand as a dominant power in the skies of the Mortal Realms.[23c]

The Rune of the Realm of Chamon is the Soaring Eagle, resonant of the nobility and power of the Realm, it is notable that many peoples of Chamon prize avian familiars which come in a myriad of forms - magical, mechanical, organic and spectral. [15]

A reality glittering with endless untapped wealth, The Realm of Chamon is a place of science, industry and change. The embodiment of metal, logic, engineering and transmutation. In some places iron may spontaneously transmute into sapphire or ale may be transmuted into water. In other places, the lands might behave more like some enormous great machine, the lands moving in clockwork synchronization. [14b] [14a] [15]

Chamon's firmament is ever-shifting but certain sub-realms abide, giving shape to the so-called Lands of Gold. Instead of one single plate in a unified realmsphere, Chamon consists of a dizzying variety of distinct domains that hang in the Chamon firmament, each linked to the others by portals and mystical bonds. In Azyr it is often depicted as the laboratory of some godly alchemist.[14b]

Most of Chamon is metallic in nature but has verdant reaches and pure water in abundance in those sub-realms nearest to the realmsphere’s core. However even in them trees may have glinting, ironhard bark while the earth may bear a ferrous sheen or hues of exotic oxides in places. The outskirts of Chamon on the other hand are are ever changing to the point of madness.[14b]

In Chamon, precious metals like gold can be found in abundance, but decent food sources are rare.[18] Any food plants grown in the realm are often strange, absorbing many of the abundant minerals but are edible if prepared correctly - however, the animal life can be toxic if consumed by non-natives. [21a]

The people of Chamon are determined, stubborn, ambitious and innovative. They are paradoxical, many are stubbornly traditional and are hard as the mountains, while many others are innovative and seek to reach greater heights of scientific knowledge and progress. The civilizations of Chamon are the most scientifically advanced, brilliant engineers create complex clockwork automatons, alchemists produce wondrous potions and metallurgists produce new metals never before seen.[14b] [14a] [15]

Fashion in the sub-realms is represented with the colours often associated with Chamon, greys, golds and many other colours of metal. from the brown of bronze to shimmering silver.[14b] [14a] [15]

As the Age of Sigmar began Chamon's metallic landscapes pulsed azure in colour.[4b]

The atmospheric limits of one of the Lands of Gold.

Unlike other Mortal Realms, which have one single and unified realmsphere containing one single dominion, Chamon is akin to a constellation of various sub-realms hanging within the Void of the Chamon firmament.[14b] Those sub-realms drifting within Chamon are linked to each other by realmgates and undiscovered mystical bonds.[14b][21d] 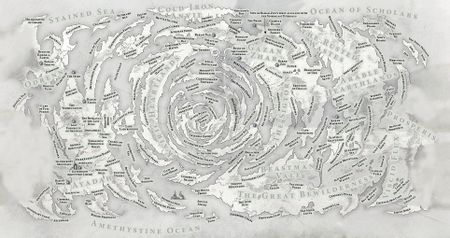 The Spiral Crux is the most explored sub-realm that form Chamon and contains multiple continents and oceans. In the Age of Myth, Grungni constructed a perfectly geometric archipelago, previously named the Godwrought Isles, at the very centre of the Realm of Chamon. It is this sub-realm that would later become known as the Spiral Crux following its corruption by the forces of Tzeentch.[23b]

The Hanging Valleys is a sub-realm set apart from the rest of Chamon in the void. These mountainous lands are much like a world torn into scraps and arranged in a staggered sequence. Riverfalls of molten silver connect them, each overflowing from an unimaginable vast crucible set above it all and heated by the warpfire of the zodiac serpent Argentine.[5]

A Sky-Port of the Kharadron Overlords.

Most powerful Kharadron Overlords sky-ports are located in Chamon where abundant sources of aether-gold can be found.[10]

Steely determination and ambition are a common trait of those that hail from the Realm whilst warriors from Chamon are equally renowned for their quality of the weapons, armour and gear and their stubbornness.[15]

The Realmsphere Magic and spells associated with the realm of Chamon are known as Gold Spells.[24b][24c]