Keepers of Secrets are greater Daemons of the Chaos God Slaanesh and are some of his closest companions and servants.[2a]

Keepers of Secrets are made from Slaanesh's very essence and, because of the Dark Prince's fickle mind, with thousands of whims and moods that flit through him every day, gives them very different personalities, agendas and desires despite originating from the same cloth.[2a]

Their bodies are powerfully muscled with four slender and delicate, yet hideously strong arms. Two of their four arms end in elegant, curved pincers. The other hands are human-like with razor-sharp claws decorated with brightly coloured lacquers often wield weapons of exquisite design. They bedecked themselves with jewels that hold the souls of their favourite victims.[2a]

Due to the fickle essence of Slaanesh that is used to create them, each has very different personality with burning desires and agendas that they will do anything to achieve. These are normally eradicating entire species, toppling empires or reducing metropolises to rubble. Despite their difference and nuances each of them are extensions of the will of their god and are fulfilling another part of his plan, as they have no other choice and few of them realise this face.[2a]

Both pain and pleasure are irrevocably blended in their minds, meaning that the bliss they find in battle is unmatched outside of their god's domain. Because Slaanesh rarely sends his greater daemons to war this is a task they relish to their core. They take gloating and sadistic pleasure in all acts of killing and torture and, to them, excruciatingly painful deaths are just a form of creative expression. To them the interplay of impact, gore and horror that follows every swing and thrust is an act of artful blood-letting and their a dark delight to be taken from them. Their quick perceptions allow them to see and appreciate things like a squirt of blood that only lasts a split second. Yet in that moment they can delight in every nuance of motion and emotion around it, gaining more satisfaction from that sight, than a master artisan would from spending a year among the greatest works of a lost civilization. To a Keeper there is nothing more satisfying than corrupting a warrior with a noble heart, turning their righteous cause into a sacrifice at the altar of Slaanesh's perverse will.[2a]

A Keeper of Secrets will enjoy the start of a battle, the anticipation of a feast to come is itself a delicious meal to be savoured. This makes them seem at the start of a battle as unhurried and leisure, even lazy, but as a battle continues to devolve into anarchy they will become faster and faster until its moving so fast it seems impossible to follow. They will attack depending on their own diabolic whims, sometimes decapitating or disembowelling while at others they merely cripple their prey. Keepers then feed on the strong emotions that mortals feel as they are torn apart, glutting themselves on their pain and terror, and become more inspired to ever greater feats of slaughter. This slaughter is done almost artistically, spilling blood in pleasing patterns or spreading body parts in order to create an exotic tapestry. Desperate pleas of mercy and berserk battle cries are music to their ears as if it was an opera that honours Slaanesh. It is in their nature to try and explore all of the ways of murder and they will even pluck the still-beating heart from the chest of mortals and devour it with a sickening moan of delight.[2a]

Keepers of Secrets have a steady and confident stride.[2a] 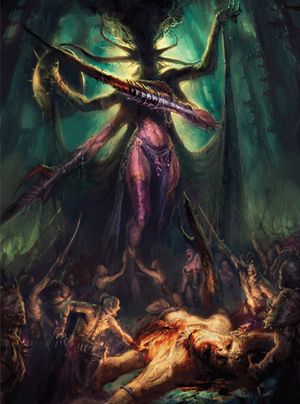 A Keeper of Secrets being worshipped after defeating its rival.

They are highly intelligent creatures, masters of psyche and claimed to be some of the most entrancing of all immortals. To look at one is to lose every last shred of ones' willpower. They use silvered words and languid gestures together with their knowledge of the most intimate desires of every mortal being to gain an undeniable power over their foes by seducing them with whispered promises they have no hope of resisting. Of those who have encountered them few can describe the sensations that were overwhelmed their rationality, like the shame of their desires or the lust for violence and depravity. Should someone survive and encounter with it and try to live a normal life, the sight will always torment them, just behind their eyes and their dreams. This is a form of corruption that occurs from linking thoughts with the creature embedding so deep into the shadowed corners of one's mind that it will eventually bursts from them in the most horrific way. Their survival becomes one of the most dangerous secret of all, for none can claim to be unchanged by the experience.[2a]

They are loathsome yet beguiling, and those who look upon them feel a sick feeling of terror and heartfelt awe. They carry the scent of their god's blessing like an aura, made out of glamours and mind-dulling husks that masks their true form with a supernatural allure. In fact their very presence inspires an excess of violence, turning cautious sparks of passion into an overwhelming desire for brutality. Their most powerful weapon is their voice, able to turn any mortal mind from their true course with a promise of power that would even allow it to lay down the daemon they are bargaining with. The true price of these bargains is the immortal souls of those who accept it.[2a]

During battle a Keeper is a graceful, lighting-fast and vicious killer that delight in the wanton violence they unleash or is unleashed by others. Their reaction speeds and ability to process information are so fast they stare in rapt attention to a squirt of blood from an artery that only lasts a split second. It has devastating physical power, able to rip out out a man's heart from his chest like they were plucking a ripe plum from a tree, making them surprisingly lethal even when unarmed. Their non-pincer hands wield exquisite weapon, from elegant greatblades, long and sharp enough to cut a charging Mournfang in half, to semi-sentient whips, that entrap their prey by twisting and curling. It pincers can scissor through a plate-armoured knight.[2a]

Keepers of Secrets also possess knowledge of many mystical arts and able to weaving sorceries that target and lead the weak-willed to their doom. They invade the thoughts and senses of their prey, penetrating their every mental defence and send them visions of glory that titillate their egos and caress their inner desires so that they will be led astray. A gentle gesture can bewitch even the most pure and barbaric, like thuggish ogors, aelven nobles and stormcast paladins, stumbling forwards to touch smell and taste their skin. Should they fail to resist these spells they will walk all too willingly into the claws of his new idol, worshipping it until they die.[2a] 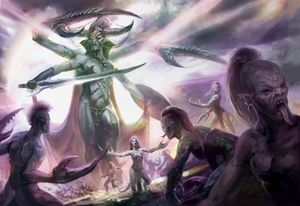 A Keeper of Secrets entering the Mortal Realms through a tear in reality.

The most devoted of the Hedonites can summon a keeper to lead them to revel in war. For that to happen the reek of depravity must reach dizzying heights, be that in a feast hall, throne room or a battlefield. Should it work they daemon will stride from a tear in reality as it cries out in unholy joy. It will then breath in the heady stench of the scene before them to assess the greatest opportunities for glorious slaughter in the name of Slaanesh, before striding forwards to kill.[2a]

These greater daemons lead each faction within the ranks of the Hedonites. Amongst their servants the Keepers of Secrets value most those Daemonettes that can bring the more hidden truths, extracted from the lips of their dying enemies a valuable currency amongst those dwelling in the Circles of Slaanesh.[2a][2b]

Slaanesh only deploys these greater daemons to a war front when all else has failed, because armed conflict is only a small part of the strategy of their patron. Only when sheer, uncompromising force is only available course he has is that the god sends his greater daemons to deliver it in excess.[2a]

Soulfeasters are sensation addicts, devoted above all else to the pursuit of new experiences. When they roam the battlefield, they do so under the control of their own ecstatic whims. They use their soulfeaster tendrils snaking from the back of their heads to stab the minds of their adversary and drink and gorge themselves on the emotion of their victim.[1a]