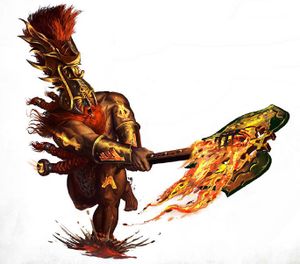 Grimwrath Berzerkers are the avatars of endurance and destruction of the Fyreslayers and the strongest and most skilful warriors of their Lodges. Their bodies are covered in glowing Ur-Gold runes, far more than the average fyreslayer, that awakens the spirit of Grimnir within them. These runes gives them not only incredible strength and merciless determination but also the ability to ignore mortal wounds, fighting on until the battlefield is clear of enemies, and enter a state of single-minded frenzy.[1][2a]

To become a Grimwrath Berzerker, the Duardin must pass the Test of Wrath under the supervision of the Zharrgrim priesthood, which the priesthood often rejects. [4a] 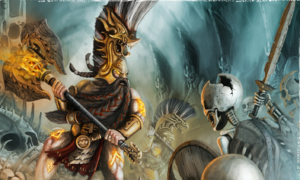 They are loners themselves by Fyreslayers standards, and are gruff, impulsive, and aggressive. Their anger makes them legendary warriors, who are also bad leaders.[4a]

Grimwrath Berzerker are in the best case not socially acceptable and in the worst case insane, as they only achieve satisfaction in combat. [4a]

They are the greatest warriors of the lodge and, according to ancient tradition, stand apart from the rule of the Auric Runefathers and the Auric Runemasters and are not accountable to them, through unlike the Doomseekers, they remain loyal to their lodge. They only leave the Magmahold in phases of extreme anger for goals that are worthy of their martial skills. [4a]

A Grimwrath Berzerker is armed with a Fyrestorm Greataxe, and some also carry Fyresteel Throwing Axes.[1][2a]